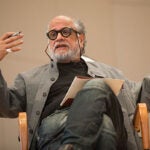 GETTYSBURG, Pa. — One hundred and fifty years ago, on the eve of the epic Civil War battle that bears its name, Gettysburg was a farming town of 2,400 people. After three days of fighting, for each one of those residents, 20 Confederate and Union soldiers were dead, wounded, or missing. The casualties totaled 46,000, the most of the war in one battle. There were 8,000 dead.

The carnage from the pivotal July battle prompted President Abraham Lincoln to visit in November to dedicate a national cemetery. Toward the end of the ceremony, he delivered his landmark Gettysburg Address, 270 words that strove to give meaning to death on a vast scale and to enlist the dead in a higher national purpose, for “a new birth of freedom.”

To honor the battle, remember the soldiers, and commemorate the 150th anniversary of the address, Harvard President Drew Faust and other dignitaries took the stage Monday for a panel discussion about “These Honored Dead: Death and Rebirth in the Civil War,” an event sponsored by the Gettysburg National Military Park, the Gettysburg Foundation, and Gettysburg College. Hundreds of listeners filled the visitors’ center from end to end.

In addition to Faust, the panel included documentarian Ric Burns, who worked with his brother Ken to produce the 1990 classic television series “The Civil War,” and Admiral Mike Mullen, chairman of the Joint Chiefs of Staff from 2007 to 2011, and a Vietnam veteran.

Last year, Burns released the Emmy-nominated documentary “Death and the Civil War,” a work based on a book by Faust. “This Republic of Suffering” is a study of death and remembering involving the Civil War. The New York Times named it one of the 10 best books of 2008.

Gettysburg was the second and last major incursion of Confederate forces into the North. It brought the shock of conflict to the quietude of the Union and made the war national, said Faust. In turn, unintended effects of Gettysburg and other battles helped to make the United States modern, as a nation whose institutions grew up around the bureaucratic needs of dealing with death on a massive scale. The government had to handle federal pensions, hospitals, record-keeping, and other demands of scale.

The United States also became a country where grieving the dead became a great project, transferring it from the scale of family to the scale of nation. Gettysburg was one of five national cemeteries created during the war at battle sites to honor the dead.

“Their precious, precious blood” would live on, Walt Whitman wrote of the honored dead in an 1865 poem, “in unseen essence and odor of surface and grass, centuries hence.”

Whitman was a nurse during the war. His knowing, elegiac voice is used to good effect in the Burns film, which was a fourth panelist in a way. Twenty-four minutes of clips led off the event, including the introduction of “the first war of the modern age,” as a narrator related. The segment on Gettysburg focused on its July death toll and the November address: 10 sentences that were both poignant and a call to action, Lincoln’s “unfinished work” of democracy.

The genius of both the film and the book is to relate a republic’s pain in a series of stories about private suffering. “Dear Father,” begins a letter by Confederate soldier James Robert Montgomery, mortally wounded. “This will be my last letter to you.” Its two pages are spotted with blood.

“What happened here 150 years ago was very close to the death of the American experiment,” Burns said. But Lincoln’s address helped to recast and revive sentiment for union, he said. Faust agreed.

Mullen said the number lost in three days at Gettysburg is close to what America’s latest wars have cost in 12 years. “And yet the essence is still the same,” he said, “for any one of those families” that lost a soldier in Iraq and Afghanistan. During his tenure with the Joint Chiefs, Mullen wanted the country to see “the face of the war,” he said, “the essence of those costs. [But] it is too easy to forget, or to not have a stake. We’ve made it too easy on Americans to go to war.”

The Civil War was different, joining citizens and soldiers in “the work of death,” said Faust, “to make some deaths in war have this larger perspective.” It is as if Americans back then were saying “We’re going to honor them best by being different ourselves.”

During the war, 750,000 Americans died from combat and disease, 2.5 percent of the population. In the South, among men of military age, 20 percent died.

On that commemoration day in 1863, 4½ months after fighting ceased, Lincoln’s higher sense of purpose was accompanied by the stark reality that half of the battle’s dead were still unburied. Until frost that year, residents of Gettysburg applied peppermint oil under their noses to quell the odor of death.

Faust suggested that Americans 150 years after the Gettysburg Address had let slip some sense of national purpose, one in which the Union would be a model of democracy for a world in need of it. Lincoln “thought we were a project as a nation,” she said, in a 19th century world where democracy was faltering and “becoming very rare.”

Mullen lamented the present-day absence of “some kind of call to action, public speaking that calls to action.”

Faust explained the context of the speech 150 years ago, marveling again at the power of history “in getting us to a deeper place.” Lincoln had toured the battlefield before delivering his address, including the spot at Herbst Woods where his friend Maj. Gen. John F. Reynolds had died on July 1. Lincoln added the phrase “under God” to his address after seeing where his friend had fallen.

“Lincoln was so moved by being here,” said Faust. “From the very start, this place has had … a miasma of meaning, a miasma of requiring something of us.”

Mullen concurred, picking a line from the address that goes deep to his sense of purpose in the military: “That we here highly resolve that these dead shall not have died in vain.” Americans under arms today are, as always, young, with an average age of 20 and 21, “and not a single one has ever died in vain,” Mullen said of their devotion to national purpose. Mullen feared the day “we lose that as a nation.”

Gettysburg has another role in history, too, “to show what you choose when you choose war,” said Faust, remembering the scale of death’s storm that unfolded there. “Let the costs be clear.”