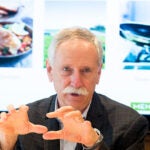 An end to trans fats?

“It was all I could do to not leap out of my chair and go, ‘Yaaay!’ ” Hansen said of the spring hearing.

To Hansen, the American Civil Liberties Union (ACLU) lawyer who led the lawsuit against Myriad Genetics’ patents of two human breast cancer genes, BRCA1 and BRCA2, the exchange augured well for the case’s outcome. The line of questioning seemed to bolster the ACLU’s argument that the genes were a product of nature, like a kidney, and so by law, not patentable. In isolating the genes for breast cancer, it argued, Myriad invented nothing that wasn’t already there.

That reasoning ultimately won the day. In its July decision, the Supreme Court ruled unanimously that human genes were not patentable, overturning common practice both in the biotech industry and at the U.S. Patent and Trade Office, which by the time of the case had issued patents for 20 percent of human genes. The decision also found, however, that synthetic copies of genes, called cDNA, were patentable.

Hansen discussed the proceedings and the decision’s ramifications Tuesday at the Science Center. He was joined by George Church, the Robert Winthrop Professor of Genetics at Harvard Medical School; Professor I. Glenn Cohen of Harvard Law School; Judy Norsigian, executive director Our Bodies Ourselves, a nonprofit focused on women’s health; and Tania Simoncelli, former ACLU science adviser and today assistant director for forensic sciences with the White House Office of Science and Technology Policy. Sheila Jasanoff, the Pforzheimer Professor of Science and Technology at the Kennedy School, served as moderator.

It was Simoncelli who first brought human gene patenting to Hansen’s attention. The pair credited part of the victory to the broad-based legal strategy that involved multiple plaintiffs to illustrate the wider societal cost of patent restrictions. Among the plaintiffs were scientists whose research was restricted by Myriad’s patents — including the lead plaintiff, the Association for Molecular Pathology — patient advocates, and patients themselves, whose diagnostic choices were limited by the patents.

Though several plaintiffs were removed from the case after the court ruled they didn’t have standing, Simoncelli said the early momentum forced the federal attorneys representing the Patent Office, also named in the suit, to look beyond patent law in order to investigate the practice’s broader effects. That was a key reason the government switched sides midway through the case, she believed, and may also have prompted the Supreme Court to decide to hear it.

After Hansen’s presentation, the others offered their thoughts as part of a panel. Church, who himself holds some 60 patents, said he was among the first geneticists approached by the ACLU and was involved early on, but withdrew later. He became convinced, he said, that the pace of genetic technology’s advance would soon make Myriad’s patents irrelevant, overtaken by cheap whole genome decoding that included analysis of BRCA genes. He also was concerned that even a win wouldn’t be enough because Myriad held related patents it could use to similar effect. And finally, Church said, he was concerned that the alternative to patents, which are open and available to researchers to read and build on, would be a move toward hiding discoveries as trade secrets, which would reduce scientific openness.

“I worry about trade secrets quite a bit,” Church said. “Patents are publications; my lab uses them all the time. They look at other people’s patents — we otherwise wouldn’t be able to figure out what the heck they’re doing. We invent on top of it, and things go forward quickly.”

Cohen — who filed an amicus brief to the court on behalf of Eric Lander, director of the Broad Institute of Harvard and MIT — agreed with the decision but said it provides scant reasoning for lower courts to build on. It might be best for Congress to revisit the issue and devise better legal guidelines, he said.

The event, part of a lecture series run by the Kennedy School’s Program on Science, Technology, and Society, was co-sponsored by the Harvard University Center for the Environment, the School of Engineering and Applied Sciences, and the Graduate School of Design.