Fighting prejudice by admitting it 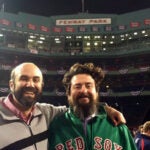 Everyone has some, speaker says, but there are ways to confront and reduce that

“Every single person in this room is prejudiced,” said Gail Price-Wise to the more than 100 people assembled in the Student Organization Center at Hilles.  With that provocative opening salvo, Price-Wise spent the next 2½ hours explaining why everyone makes prejudicial judgments, and what to do about it.

“Prejudice is an uncomfortable word because it is so painful,” said Price-Wise, founder and president of the Florida Center for Cultural Competence.  Her presentation, “Managing Your Biases as a Step Toward Cultural Competence,” was the first of three Faculty of Arts and Sciences (FAS) diversity dialogues planned for the academic year.

“This presentation was one of the most interactive that we have had.  The audience was clearly engaged in the discussion,” said Andrea Kelton-Harris, senior human resources consultant in FAS.

“If you don’t, you’re not human,” she said.  Everyone has a negative, gut reaction to certain people or different groups who are different and that those doing the judging know nothing about.  “We pre-judge people and have an automatic feeling about them just by how they look.”  She confessed that she has a negative reaction to people with brightly colored hair and those with lots of tattoos.

In adults, Price-Wise said there is no such thing as a first impression.  “When you react or have a gut feeling about someone, it’s based on something you’ve seen or experienced in the past,” she said. Prejudice requires that you think all “those” people are the same.  The good news, she said, is the more exposure you have to a group, the more you get to know individuals, the weaker the prejudice becomes.

More good news, according to Price-Wise, is that people can manage their prejudice.  “’Fess up,” she said.  Admit to the prejudice, and try to figure out where it came from.  People are not born prejudiced.  They pick up prejudice from various sources during their life: books, movies, television, family members, friends, etc.  “Examine the statement ‘Those people are all the same,’ and remind yourself that it’s not true,” she suggested.

Further, she said, “Learn about the individuals you meet.”  She added, “Everything you think or say about a cultural group is true of some people in that cultural group and not true of other people in that group.  Individuals differ based on how they were raised, their personal life experiences, their education, socio-economic status, whether they have traveled, and the personality they were born with.”

Price-Wise cautioned the audience about micro-aggressions, “a subtle and often unintentional offense, such as comments like ‘You’re very smart for someone of your race,’ or ‘Some of my best friends are …,’ or ‘As a woman, I face discrimination too.’ ” What should you do if confronted with micro-aggressions?  Assess the intent, she said.  “Did the person intend to be insulting or hurtful?”  Next, “Determine if it’s worth confronting.  Is the person reasonable?  Is this a relationship you care about?  Will you feel better?”

If the remark warrants a response, Price-Wise suggests making sure you are calm before confronting the person.  For example, regarding the comment, “You’re very smart for someone of your race,” she said, “Don’t accuse the person of prejudice or racism, but inform them that the comment or action was hurtful and why.”  She suggested saying something like, “That comment makes me feel bad because it implies that people of my race are generally not intelligent.”  Finally, she suggests adding missing information, such as, “Actually, most people of my race are quite intelligent and hard-working, just like people of your race. The news only reports on people in trouble and distorts the truth about most of us.”

Finally, how do you address your own micro-aggressions?  Price-Wise advised, “If you know you said something dumb, apologize and try to learn something about the people for whom you have a prejudice.”