Dining in the dark 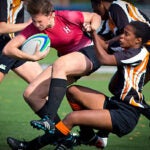 The food was the only standard part of Nick Hoekstra’s dinner party.

That’s because all of his guests wore blindfolds and sat together in a dark room. Waiters dressed in black ushered out the first course, a roasted apple and butternut squash bisque with a cinnamon-sugar brioche crouton in the center. Jennie Reuter groped for a spoon but ended up dipping her fingers in the soup.

It was all part of Hoekstra’s plan: the accidents, the humor, the discovery that comes with dining in darkness. Hoekstra, a student at the Harvard Graduate School of Education (HGSE), lost his vision when he was 8 years old, the result of a pseudotumor in his brain. In the years since, he has learned to rely on his other senses to get by. But his friends had no such experience.

“Can you just tell me is this a glass of water I’m holding?” Jenny Gombas wondered. Of course, no one could help her.

“It feels awkward,” remarked Manasa Prabhakar of the blindfold. “So, so awkward.”

“It is a bit disorienting,” agreed Jeff Thompson.

“Too often in our daily lives, we focus on the aesthetic of the food. We spend so much time looking at our dining partners instead of really experiencing the food — the taste and the smell,” said Hoekstra of the idea behind his venture. “I wanted to share what it’s like to not be distracted, to experience food through the other senses.”

Collaborating with HGSE’s Office of Student Affairs, Office of Access and Disability Services, and the International Higher Education disability student group, Hoekstra devised a three-course menu with the Gutman café staff. Around 30 HGSE students turned up for “Dining in the Dark.”

“I thought it’d be an interesting challenge to put ourselves in Nick’s shoes,” said Janice Chong.

The students grappled with what they tasted, and argued about it, too.

“I have no idea what the food is. I have no idea if it’s soup or not,” said Chong. “It tastes like liquid apple pie. At first I was afraid I was going to burn myself. I missed my mouth a couple of times.”

Some wagered that the soup was pumpkin; one student thought yams. They all agreed the color of the soup was orange, but the crouton confounded them.

“When I was a kid and tried to eat soup, I found keeping the spoon level was really difficult,” recalled Hoekstra.

The second course was a maple-chipotle-glazed, pan-roasted, boneless chicken thigh with sweet potato and beet hash.

Gombas went rogue and ate with her fingers. “I just thought that’s what everyone else was doing,” she said.

Between courses, Hoekstra asked his friends their impressions.

“I can’t believe how bad I am at figuring out what we’re eating,” said one student.

Others remarked how noisy the dinner was without vision to put the scene in perspective. It was also troublesome to engage in a fluid conversation.

But they toasted — albeit clumsily — to the night anyway.

“Let me ask you this,” said Hoekstra. “Are you all finding your dining partners more attractive than normal?”