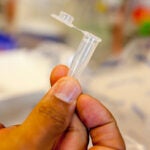 Harvard stem cell scientists have discovered that the same chemicals that stimulate muscle development in zebrafish can be used to differentiate human stem cells into muscle cells in the laboratory — and overcoming that historically challenging task has made muscle cell therapy a more realistic clinical possibility.

The work, published in the journal Cell, began with a discovery by Children’s Hospital Boston researchers led by Leonard Zon and graduate student Cong (Tony) Xu, who tested 2,400 chemicals in cultures of zebrafish embryo cells to determine if any could increase the numbers of muscle cells formed. Using fluorescent reporter fish in which muscle cells were visible during their creation, the researchers found six chemicals that were very effective at promoting muscle formation.

Zon, a professor with the Harvard Department of Stem Cell and Regenerative Biology (HSCRB), chair of the Harvard Stem Cell Institute executive committee, and director of the stem cell program at Children’s, shared his results with HSCRB Professor Amy Wagers and Mohammadsharif Tabebordbar, a graduate student in her laboratory, who tested the six chemicals in mice. One of the six, called forskolin, was found to increase the numbers of muscle stem cells from mice that could be obtained when these cells were grown in laboratory dishes. Moreover, the cultured cells successfully integrated into muscle when transplanted back into mice.

Inspired by the successful application of these chemicals in mice, Salvatore Iovino, a joint postdoctoral fellow in the Wagers lab and the lab of C. Ronald Kahn at the Joslin Diabetes Center, investigated whether the chemicals would also affect human cells.  He found that a combination of three chemicals, including forskolin, could induce differentiation of human induced pluripotent stem (iPS) cells, made by reprogramming skin cells.

Exposing the iPS cells to these chemicals converted them into skeletal muscle, an outcome the Wagers and Kahn labs had been striving to achieve for years using conventional methods. When transplanted into a mouse, the human iPS-derived muscle cells also contributed to muscle repair, offering early promise that this protocol could provide a route to muscle stem cell therapy in humans.

The interdisciplinary, cross-laboratory collaboration among Zon, Wagers, and Kahn highlights the advantage of open exchange for researchers. “If we had done this screen directly on human iPS cells, it would have taken at least 10 times as long and cost 100 times as much,” said Wagers. “The zebrafish gave us a big advantage here because it has a fast generation time, rapid development, and can be easily and relatively cheaply screened in a culture dish.”

“This research demonstrates that over 300 million years of evolution, the pathways used in the fish are conserved through vertebrates all the way up to the human,” said Zon. “We can now make enough human muscle progenitors in a dish to allow us to model diseases of the muscle lineage, like Duchenne muscular dystrophy, conduct drug screens to find chemicals that correct those diseases, and, in the long term, efficiently transplant muscle stem cells into a patient.”

In a similar biomedical application, Kahn, who is chief academic officer at the Joslin, plans to apply the new ability to rapid production of muscle stem cells for diabetes research. His lab will generate iPS-derived muscle cells from people who are at risk for diabetes and people who have diabetes to identify alterations that lead to insulin resistance in the muscle.

Going forward, Zon plans to apply this platform of cross-species discovery to other stem cell lines, including those involved in blood and eye development. “We have a new system to use to study tissue development, and it’s not just muscle that can be studied. Every single organ can be studied in the zebrafish system,” he said.