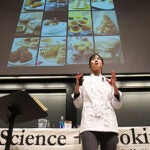 Stavins hopes for progress toward Kyoto successor at Warsaw conference

Delegates from around the world have gathered in Warsaw this week to discuss a path toward a post-Kyoto Protocol climate agreement.

Robert Stavins, the Kennedy School’s Albert Pratt Professor of Business and Government and head of the Harvard Project on Climate Agreements, is attending the conference. The Gazette sat down with him beforehand to talk about what’s expected from the session and next steps.

GAZETTE: Can you tell me who is attending the conference and describe its purpose?

STAVINS: This is the 19th annual Conference of the Parties to the United Nations Framework Convention on Climate Change [UNFCCC]. There will be delegations from the approximately 195 countries who participate in that convention and who originally negotiated the Kyoto Protocol and who are now in the process of negotiating what will be a successor to it.

GAZETTE: How important is this conference in making progress toward a new global agreement?

STAVINS: It’s important as a step in the process. The way to view this really is as a relay race that culminates two years from now in Paris at the 21st of these annual negotiations. So the issue is whether this conference successfully passes the baton.

A very important change occurred in international negotiations two years ago in Durban, South Africa. It is referred to as the Durban Platform for Enhanced Action. In it, the nations of the world agreed to reach an agreement by 2015 — for implementation in 2020 when the Kyoto Protocol terminates — a broader agreement to follow the Kyoto Protocol that would bring all countries under the same legal mechanism.

That is an extremely strong and very important departure from the history of the negotiations. Until now, they have divided the world into two categories: the so-called Annex 1 countries — essentially the OECD [Organization for Economic Cooperation and Development] countries — which take on [emissions] targets as under Kyoto. The rest of the world, referred to sometimes in a rather misleading way as the “developing countries,” because it includes the large emerging economies of China, India, Brazil, South Africa, Korea, and Mexico, has no responsibilities. The Durban platform posits that there will be a new agreement that will cover all countries.

The Harvard Project on Climate Agreements, the purpose of which is to help the negotiating countries identify a post-Kyoto framework that is scientifically sound, economically sensible, and politically pragmatic, is now coming into its own because the negotiators are grappling with just those issues. They are very much searching for outside-the-box thinking, which is what academics do best.

GAZETTE: Are you optimistic about Paris in two years, given past failures?

STAVINS: I’m cautiously optimistic, because to me, success depends on whether we’re making progress, as opposed to “solving the problem.” I say this because the problem is not going to be solved very soon.

I think back to JFK’s inaugural address when he said we’re not going to solve these world problems in 10 days, the first 100 days, the first 1,000 days of his administration or even in our lifetimes. I suspect it’s somewhat the same with climate change.

GAZETTE: You mentioned that success for this conference would be passing the baton in the relay race. Are there specific things that entail the passing of that baton?

STAVINS: They need to come up with a work plan for developing the Durban Platform for Enhanced Action, so that they have a policy architecture to vote on in 2015: this is what we’re going to do, these are the questions we’re going to address at this location and at this time in the process. The work will occur not just at the annual conferences, but also at intermediate meetings throughout the year. So developing the work plan is absolutely essential.

GAZETTE: What does the Harvard Project on Climate Agreements have planned for this conference?

We’re going to report on the results of a workshop we held in Berlin with the Mercator Research Institute on Global Commons and Climate Change that includes some recommendations for the path ahead.

We’re going to be looking at ways to link policies together. It’s essentially a bottom-up movement of bilateral linkages that then become an implicit — you can think of it as a de facto — international policy.

We also get more and more requests from individual negotiating teams to meet with us so that we can tell them individually about the result of recent research from our various research teams in the Harvard Project. We answer their questions of all kinds. And we also have meetings with the press and with NGOs [nongovernmental organizations].