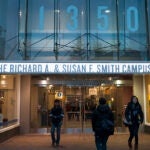 It was pretty much the opposite of a quiet Saturday morning brunch, a rough-and-tumble rugby match in which 15 fierce and brawny Harvard women relentlessly tackled Princeton’s players to move the ball up the pitch and score.

Beginning this season, the scrappy rugby sisterhood became more than a club, as the first Harvard sport to achieve varsity designation since 1993. The Harvard-Radcliffe Women’s Rugby Club dated to 1982, and continued for more than 30 years with a legacy of strong coaches and determined players.

The club made a compelling argument for varsity status in the spring of 2011, when it won the USA Rugby Collegiate Division II National Championship, with a 22-10 upset victory over Notre Dame.

With losses to Quinnipiac and Dartmouth at the start of this season, the ruggers went on to beat five other rivals and on Nov. 2 and 3 bested both Brown and Dartmouth in the conference championship in New Hampshire.

Its winning record has qualified the team for the national tournament in the spring. For now, though, the players can savor not a formal dinner for the genteel, but even better, the Ancient Eight title they earned in this inaugural season as a varsity team.