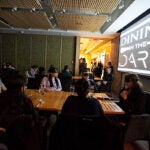 Dining in the dark

Carolyn Abbate, one of the world’s most accomplished and admired music historians, has been named to become a University Professor, Harvard’s highest honor for a faculty member.  Her appointment as the Paul and Catherine Buttenwieser University Professor will take effect on Jan. 1, 2014.

An influential scholar of exceptional originality, Abbate has focused her research principally on opera as it has evolved over the past four centuries, with special emphasis on the 19th and 20th centuries. Her work ranges widely, drawing on diverse arts and humanities disciplines, including cultural history, sound and film studies, and philosophy.

“Carolyn Abbate’s imagination and sense of intellectual adventure have changed the course of musicology,” said President Drew Faust. “With its original and highly interdisciplinary outlook, her work helps us to see the many disparate elements of opera each in relation to the other, as part of a polyphonic whole, and to see great works in their social and cultural contexts. And by illuminating such considerations as the intentions of the composer, the technical challenges facing performers, and the subjective experiences of audience members, she enlarges and enlivens our understanding not just of opera but of music more generally.”

A stimulating teacher and mentor of both undergraduate and graduate students, Abbate has taught courses across the range of her expertise, including music history surveys, freshman seminars, and graduate seminars on topics ranging from Mozart and automata in the Enlightenment, to opera and politics in the 19th century, to the evolution of film sound technology.  Beyond her academic work, Abbate is herself a talented performer, and she has been active in staging musical and operatic works, including serving as a dramaturg for productions at the Metropolitan Opera.

Abbate’s work has implications for scholarship on a wide range of musical periods and genres, in its exploration of issues such as the concept of “voice,” layers of communication in opera and instrumental music, the ontology of ephemeral art, and sound technology’s influence on the perception of musical meaning. Her work also illuminates the interplay of opera with its cultural and historical contexts, while opening the field toward a more open perspective on music as experience and performance.

“This is a tremendous honor, and I cannot adequately express how grateful I am,” Abbate said. “For someone who has always been listening to what can be heard outside the world of music, being at Harvard — where there are extraordinary conversations in so many fields — is a very great privilege. Harvard students can stop you in your tracks with their imagination, and I have the good fortune to be surrounded by faculty colleagues whose intellectual verve is a similar source of delight. The University Professorships recognize crossing boundaries; I will do all I can to be worthy of the challenge inherent in that vision.”

Abbate graduated from Yale College in 1977 and earned her Ph.D. from Princeton in 1984. She joined the Princeton faculty that same year, and she was named a full professor and published her first book, “Unsung Voices,” in 1991. “Unsung Voices” remains a seminal text, a rich resource of fact, method, and analysis that changed the way scholars think about music and language by interrogating the truism of music as narrative. Her second book, “In Search of Opera,” investigated opera through the perspective of its performance networks, exploring the relationship between musical works and their material realizations, highlighting uncanny views of singers and performers, from the 1760s to the 1920s, as mediums, channels, or machines. Her most recent book is “A History of Opera: The Last Four Hundred Years,” published in 2012 with Roger Parker.  She and her co-author take on the entire lifespan of opera from its invention to its present-day incarnations, leaving opera’s absurdities intact while tracing the historical evolution of libretti, musical forms, operatic voices, and opera in literary and mass culture.  The book was named Best Classical Music Book of the Year by The Sunday Times and has been translated into several languages. Abbate has been awarded the Dent Medal by the United Kingdom Royal Musical Association as well as a Guggenheim Fellowship.

The Paul and Catherine Buttenwieser University Professorship was established by Paul A. Buttenwieser ’60, M.D. ’64, and his wife, Catherine, in 1997. Paul Buttenwieser is a Cambridge-based psychiatrist, novelist, musician, and philanthropist, and he was a member of the Harvard Board of Overseers from 2001 to 2007. In addition, he has served on numerous committees and boards across the University, currently including the Committee on University Resources, the Faculty of Arts and Sciences Boston Major Gifts Committee, and the board of the American Repertory Theater. At the 2010 Commencement Exercises he was awarded the Harvard Medal. The Buttenwiesers also founded the Family-to-Family Project to address family homelessness.