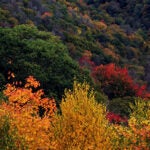 It’s often said that a good teacher can change a student’s life, and now a Harvard researcher is demonstrating how much influence an effective educator can have.

As described in a study in the Oct. 7 Proceedings of the National Academy of Sciences, Gary Chamberlain, the Louis Berkman Professor of Economics, found that middle school teachers can have an impact not only on students’ short-term educations, but on whether they attend college, and on the size of their paychecks at age 28.

“This study definitely offers suggestive evidence, certainly in a predictive sense, that teacher quality matters,” Chamberlain said. “What we’re trying to do is put numbers on the variation in teacher quality and how large an effect it has on test score outcomes, and later outcomes, like college attendance and income.”

“On average, about 38 percent of the students in this data set went on to college, so to go from 38 to nearly 39 percent, that actually is a big deal,” Chamberlain said.

In the case of earnings, the data showed students who had better teachers earned about $200 more per year, an increase of about 1 percent.

Chamberlain warned that there were factors the study was unable to control for, so influences beyond teacher quality may be contributing to the effect. While the data on college attendance could control for income variations among parents, it did not take into account parents’ education, Chamberlain said. A similar uncertainty existed for the income measures, where the standard error was nearly $95.