The start that comes with aid 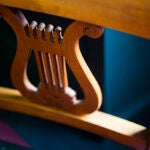 The room was filled with powerful political operatives. These were the people who managed the campaigns of the 2012 presidential election, and they were shoulder-to-shoulder with Jasmine Burnett ’16.

“Never in my life did I ever think I would be in the same room with these people. But there I was, and there was [former White House presidential adviser] David Axelrod,” said Burnett, who is on the special events committee at Harvard’s Institute of Politics. “You hear a lot about the resources that Harvard has, and the incredible opportunities that are here. Until you come here and until you experience it all, I don’t think you really realize … the opportunities that are here waiting for you.”

While Burnett has always nurtured an interest in politics, she never dreamed she would come to Harvard College. A native of Atlanta, she didn’t initially consider applying to the school.

“My mom told me from a very young age that I was going to have to work hard, not only to get into to college, but work hard to be able to pay for college,” Burnett said. “I was applying to a lot of schools, and I just thought that Harvard was so far out of my reach on both levels.”

It was Burnett’s mother who strongly urged her daughter to apply to Harvard.

“My mom said that Harvard has a great financial aid program and that I should apply. But I never thought I would get in,” she said.

To keep the College affordable for students like Burnett and others from nearly every financial background, the school has made a strong commitment to its financial aid initiative. For the current academic year the College’s financial aid budget was increased by $10 million, or 5.8 percent, bringing the total to a record $182 million. Since 2007, Harvard’s investment in financial aid for undergraduates has increased 88 percent.

Funding for this important program is one of six top priorities in the Faculty of Arts and Sciences’ (FAS) $2.5 billion Campaign for Arts and Sciences, which launched over the weekend. In total, the FAS is hoping to raise $600 million to fund financial aid. Currently, only about half of financial aid funds come from the endowment, requiring administrators to fund assistance out of the operating budget and through current-use donations provided by generous alumni. FAS Dean Michael D. Smith said he hopes to increase the percentage of endowment funding to about 80, which would put the program on a much more sustainable path.

“Keeping Harvard affordable for every extraordinary student we accept is one of our fundamental commitments. That’s what our industry-leading financial aid program is all about,” said Smith. “Through the Campaign for Arts and Sciences, we want to ensure that our leadership in this area is sustainable for the long term, so that for generations to come we can continue to encourage incredibly talented students, regardless of means, to come take advantage of all that Harvard has to offer them.”

For Burnett, even though she had been accepted, and financial aid would make Harvard an affordable option, it was when she set foot on campus that she knew Harvard was the place for her. “When I came to campus for Visitas,” the weekend program for admitted students, “I found people from very different backgrounds, yet we all had a lot in common,” she said. “And it doesn’t matter if I am a financial aid student, because most undergraduates here receive some form of aid. Whether you receive aid or not, we all eat in the same dining halls, and we all live in the same dorms.”

For August Dao ’15, the path to Harvard started halfway around the world. Dao was born in Vietnam, but came to Portland, Ore., with his family when he was just 13 months old. Being a first-generation American with parents who do not speak English, Dao said the drive to attend college came from within.

“My parents really weren’t in a position to help me out, so I really had to be proactive. When I was in middle school, I first really heard about Harvard and how it was the best school in the country, and it was my dream school for a long time,” Dao said. “My high school was one of the most poorly funded in the district, so not a lot of people in my school thought about going to a place like Harvard.”

Financial aid would play a large role in Dao’s decision of where to apply to college. He said that from the beginning, it was clear Harvard’s financial aid program was the key to helping him realize his dream.

“I was kind of amazed at how it worked and how easy it was to find information and apply for financial aid. It’s really very simple,” Dao said. Ultimately, he said, Harvard proved to be the most affordable of all the colleges that accepted him.

Dao has flourished at Harvard. In addition to being a pre-med concentrating in chemistry, he is co-president of the Southeast Asian Coalition and a singer in KeyChange, Harvard’s R&B, hip-hop, and soul a capella group. Last summer, he studied in Italy. He also travels into Boston weekly on the T to work at Health Leads, a nonprofit social services program that connects families with much-needed resources.

“What I would say to anyone applying to Harvard is that I was you at one point. You just really have to be open to the amazing possibilities Harvard presents,” Dao said.

Austin Mueller ’17 has been at Harvard only two months, but already he’s heard a number of world leaders speak. It’s quite a change from life in Chilton, Wis., his hometown of less than 4,000 people located between Milwaukee and Green Bay.

“The Harvard-Boston environment is much different than the one back home in Wisconsin,” he said.

When he was looking at colleges, Mueller said he didn’t give much thought to applying to Harvard — that is, until he learned about the financial aid program.

“I assumed that I wouldn’t be able to afford college, regardless of location or prestige. My parents wouldn’t be able to help me out with tuition, and I didn’t have much money of my own,” Mueller said. “I knew about Harvard’s financial aid program, and it is one of the main reasons that I applied. I knew that it was statistically unlikely for me to be admitted, but I took the chance because I knew it would be like winning the lottery academically and financially.”

Mueller said he is finding incredible opportunities at every turn. And he feels he’s already making his mark at Harvard.

“I think it’s important to have a broad cross-section of students at Harvard. There are talented and worthy students from all social and economic classes,” he said. “Socio-economic diversity complements racial, geographic, and all other types of diversity in creating a vibrant student body.”