The games off the field 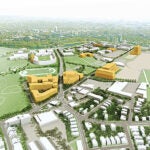 Harvard welcomed 700 of its neighbors from Allston, Brighton, and Cambridge to the annual Community Football Day, held in bright sunshine on Saturday.

For more than 20 years, Harvard has hosted neighbors on both sides of the river with game tickets as well as lunch, free of charge. This year’s game was Harvard vs. Lafayette.

Coach Renel Jean of the undefeated Brighton High School Varsity football team brought dozens of players to the event. “This is a good thing for the community,” Jean said. “This is [the team’s] first time attending a division-one football game. Harvard is undefeated too, and we’re looking forward to watching them win another one.”

Michael Dereus, a Brighton High wide receiver, leads the division in touchdown receptions. He was looking forward to seeing Nnamdi Obukwelu play for Harvard. “He was my mentor at Harvard Crimson Summer Academy,” Dereus explained. Dereus has a 3.9 GPA, and hopes to attend and play for Harvard.

Jean also brought junior varsity players to the game to give them an experience and inspire them to come back next year. Junior varsity receiver Dexter Andrews said he wants to play for Harvard, too.

Many of the team’s players come from Dorchester, Mattapan, and Roxbury. They are leading their division in touchdown passes, rushing touchdowns, and receiving touchdowns.

Lindsey Waters ’14 was one of the Harvard Crimson dancers on face-painting duty. “This makes us so happy,” said Cristina Ullmann of Cambridge as her two children proudly showed off their tattoos and excitedly pointed at the football players walking by.

Thirteen-year-old Tommy Connolly brought his mother and his two younger brothers to the event. “This is exciting,” he said. “I play football, and I like to watch it live in the neighborhood.”

Campers and staff from Camp Jabberwocky, one of the nation’s oldest camps for people with disabilities, were also enjoying the afternoon with a picnic. Steven Gardner, assistant professor in internal medicine at Harvard Medical School, has been the volunteer camp doctor for the last 18 years, and brought many local campers to the game.

There was also a raffle in the community tent for tickets to Harvard games against Dartmouth and Penn, as well as an athletic swag bag filled with goodies for a fun day in a stadium, including a foam finger and water bottle.

The Harvard University Band made a semicircle around the community tent and played “Ten Thousand Men of Harvard” to the delight of the families and neighbors inside.

“This is another beautiful day for community football. We’re happy to welcome our Allston-Brighton and Cambridge neighbors,” said Maile Takahashi, director of community programming for Harvard’s Public Affairs & Communications Department.

Many neighbors were happy to see friendly faces from last year, including Jim Barrows, Harvard’s director of community relations and civic engagement. “I remember you!” half a dozen said to him as they picked up their tickets outside the Murr Center.

“We are so glad to see so many families and individuals come out and enjoy community football day,” said Kevin Casey, associate vice president for public affairs and communications.  “This is a wonderful opportunity for folks from Harvard and the community to get together and simply enjoy a beautiful day with a mutual interest in supporting great football and friendship in the fall.”

To cap off the beautiful day, Harvard won, 35-16, and so continues undefeated.