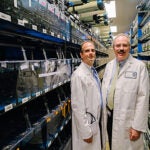 As the global obesity epidemic grows, researchers are looking worriedly at burgeoning rates of diabetes — a top risk factor for tuberculosis — and wondering if the number of TB cases will rise, too.

Though infectious diseases such as tuberculosis are often thought of as being fundamentally different from chronic diseases related to lifestyle, such as diabetes and heart disease, a growing body of research indicates that the two are tied together in ways not completely understood but likely related to the body’s immune response and the metabolic effects of fat tissue.

Researchers gathered at the Broad Institute of Harvard and MIT in Cambridge last Thursday to share insights into those links and to foster collaboration that might help unravel what’s happening.

Fortune’s comments opened the Seventh Annual New England Tuberculosis Symposium at the Broad Institute. The all-day session attracted researchers from across New England, which Fortune said may hold the largest concentration of TB researchers in the world.

Called “TB in the 21st Century: The Convergence of Infectious and Metabolic Diseases,” the symposium focused squarely on the links among TB, diabetes, and other metabolic diseases. The session featured speakers from the New England TB community as well as guests from South Africa’s Kwazulu-Natal Research Institute for Tuberculosis and HIV, the University of New Mexico, and Cornell University.

Fortune said the symposium “has the goal of bringing people together and driving research forward. We want to be at the cutting edge.”

The speakers addressed a variety of technical issues, including energy metabolism, the immune impact of dietary restriction, the role of inflammatory molecules during infection, and the search for new anti-TB drugs.

Amy Barczak, an instructor in medicine at Harvard Medical School and researcher at Harvard-affiliated Massachusetts General Hospital, described a new way to search for drug candidates, which she used to identify a handful that are promising. The slow rate of drug discovery is worrisome, she said, because it is being outpaced by the development of resistance in tuberculosis bacteria.

“It’s very sobering to look at this scenario and see we’re not keeping up with new drug development,” Barczak said.

Adrie Steyn, an investigator at the Kwazulu-Natal Research Institute for Tuberculosis and HIV, talked about the possible link between cigarette smoking and the development of drug-resistant TB. Smoking, like diabetes and HIV, is a risk factor for developing TB, and Steyn pointed out that cigarette smoke has long been known to contain compounds that help cause DNA to mutate.

The event honored HSPH’s 100th anniversary, which is being celebrated this year. Former dean Barry Bloom, Harvard University Distinguished Service Professor and Joan L. and Julius H. Jacobson Professor of Public Health, offered reflections on tuberculosis research. And Gokhan Hotamisligil, chair of the School’s Department of Genetics and Complex Diseases and the J.S. Simmons Professor of Genetics and Metabolism, served as the event’s centennial speaker, offering perspectives on metabolism and immunity.

Links between those biological processes have been known for some time, Hotamisligil said. Researchers have long known that malnutrition can interfere with the body’s immune response and increase susceptibility to infection. Similarly, links between diabetes and immunity have been noticed before, though with gangrene, not TB. Physicians in the 1940s noticed that a diabetic patient who developed gangrene needed much more insulin each day.

Hotamisligil said it is troubling that the obesity epidemic is now beginning to take hold in developing countries with little medical infrastructure.

“What it means is that many, many hundreds of millions of people will be left with no treatment. So the problem is immense,” Hotamisligil said.