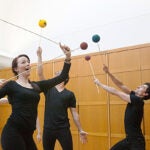 In the past, robots were designed for factories. Americans became upset when they lost jobs on the production line to mechanized arms that could do more work in less time — without salaries, health insurance, sick days, or vacations. Robots were big and clunky. Humans were kept away from them.

Today, that’s rapidly changing.  New robot systems are soft and safe to be around, and even can be wearable. Robotics has never looked so people-friendly.

In keeping with the changing times and attitudes, more than 200 people representing 18 companies and 20 universities from as far south as Washington, D.C., and as far west as Michigan attended the sold-out Second Annual Northeast Robotics Colloquium at Harvard last weekend.

Conor Walsh, assistant professor of mechanical and biomedical engineering at the School of Engineering and Applied Sciences (SEAS), is one of the pioneers of this new robotic world, and he presented his work to the conference.

Demonstrating the soft exosuit he has been developing, Walsh said, “We are designing robots specifically for people.” It’s a “totally different way than what people have done for 50 years,” he said.

Walsh’s exosuits are designed to be worn, and thus are pliable and moveable, with no resistance in movement. Walsh said the exosuit involves “smart interfacing with the body and smart ways to send information,” and enables the wearer to walk with less muscle activation. That might sound relaxing, but it’s not about being lazy. The exosuit has medical, military, and recreational applications. For instance, a recovering stroke patient could don the suit to help to restore his or her level of muscle function, allowing a better integration back into the community.

The research, funded by the Defense Advanced Research Projects Agency (DARPA), is especially useful for the military. Soldiers carry heavy loads for long periods. The suit “delays the onset of fatigue and protects the joints from injury,” by taking on a portion of the stress and movement from its wearer, Walsh said.

For example, a cast is usually applied to a broken hand. But a casts doesn’t allow the hand or fingers to move at all, so when it comes off, the hand is stiff.

But a soft disposable, elastomeric robot cast, can be plugged into a small battery pack four times a day and will then move the hand and fingers through a range of motions pre-set by a physical therapist, essentially administering physical therapy while the patient heals.

Robert Howe, Abbott and James Lawrence Professor of Engineering at SEAS, presented his i-HY, an open-source robotic hand developed and named for Harvard-Yale, the other university with which he collaborates. The i-HY hand “combines optimized passive mechanics with five motors that can use precision fingertip grasps.”

If, for example, a hurricane destroyed a power center, it would be too dangerous for humans to enter the facility to make repairs. But a robot equipped with an i-HY hand could be able to do the job. The goal, Howe said, is to have human-quality hand manipulation: “Robot hands for the real world.”

Howe said, “Real-world robustness and low cost are essential.” But after years of research, untold money, and hundreds of Ph.D. dissertations, “We still can’t do it. Forty papers have been published since the ’80s. None are able to do unstructured environment manipulation.”

So Howe left old dogmas behind and turned to the lobster as a model, creating a prototype with a 3-D printer, a three-fingered hand that can do everything from a pinch to a wrap grasp. He realized that a “hand doesn’t have to have the same dexterity as the human hand” to be effective. The i-HY also has sensors, and Howe encouraged the conference attendees to download the program and let him know the results.

The Northeast Robotics Colloquium was sponsored by Jaybridge Robotics and the Wyss Institute.