Putting a price on nature 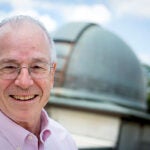 The search for other Earths

Planting a forest to improve air quality may prove to be as cost-effective as expensive new pollution-control equipment, according to preliminary results from a novel experiment at a Texas chemical plant. Officials involved in the study say this innovative approach could become a test case before the Environmental Protection Agency, which has identified reforestation as a possible strategy to improve air quality.

Leaders of an unusual collaboration between the Nature Conservancy, the largest international conservation group, and the Dow Chemical Co., a Fortune 100 company, told a Harvard Kennedy School (HKS) audience on Monday that they were encouraged by the initial findings’ confirmation that a dollars-and-cents approach to valuing nature may help businesses with their bottom line while improving the environment in their local communities.

The two organizations received the 2013 Roy Family Award for Environmental Partnership, an HKS prize administered by the Environment and Natural Resources Program at the school’s Belfer Center for Science and International Affairs.

“We uncovered material benefit from reforestation as an air quality control,” said Glenn T. Prickett, the Washington-based chief external affairs officer for the Nature Conservancy. The pilot project at Dow’s Texas manufacturing plant on the Gulf Coast of Mexico also examined how marshlands can help protect against intensifying storm surges and what types of interventions might help save a river crucial to plant cooling operations that is suffering the effects of drought and increasing water demand.

“This project asks, how do you make the economics of ecological systems work hand-in-glove with business decision-making?” said Neil C. Hawkins, the vice president for sustainability and environment, health, and safety at Dow’s headquarters in Michigan. The ultimate goal is a company-wide effort to make nature a part of doing business at its 188 sites in 36 countries and to serve as a model that can be adopted by other companies, government, and non-profit groups, said Hawkins, who holds a doctorate from the Harvard School of Public Health.

Started in January 2011 with a $10 million contribution from Dow, the collaborative, five-year project is conducting science-based work on the economics of biodiversity and “ecosystem services,” the benefits provided by natural resources such as water, land, air, plants, and animals to companies and communities.

The massive plant in Freeport, Texas, Dow’s largest manufacturing facility and the biggest chemical complex in North America, was selected for the first “living laboratory” study because of its ecologically important location on the Gulf of Mexico, amid coastal marshes, the lower Brazos River basin, and a largely depleted hardwood forest ecosystem. The Freeport area is also a key conservation region for migrating birds and a haven for diverse animals and plants. Stressors include the growing Houston-Galveston urban area and local climate change, including a severe drought that has dried up the river in recent years.

In calculating the economic value of these natural resources, Prickett and Hawkins said one of the most surprising findings was the value of planting forests in the Freeport area as a natural air-pollution control measure to remove ozone precursor emissions. Sophisticated modeling by Conservancy and Dow scientists, as well as outside experts, found that large-scale reforestation is likely a cost-effective air-pollution abatement strategy compared with the installation of conventional emission control equipment at the plant. The method also provides broader benefits to communities and wildlife and an opportunity to restore the hardwood forest ecosystem.

The conservancy plans to approach the Environmental Protection Agency to discuss how “green infrastructure,” such as reforestation, could supplement existing “gray infrastructure” — air-pollution abatement equipment — or provide an alternative to installing new and increasingly expensive engineered solutions to comply with government pollution standards, said Jennifer Molnar ’98, the Conservancy’s director of science.

Scientists participating in the collaboration are also developing a water-conservation plan upstream on the 800-mile Brazos and a hybrid model that assesses both the value of the “green” protection provided by coastal marshes and the “gray” manmade levees in protecting against storm surges and long-term sea level rise.

In June 2012, Dow and the Nature Conservancy started work at a second pilot site in Santa Vitória, Brazil, where Dow is part of a joint venture company growing sugar cane around a manufacturing facility. This poses business decisions about appropriate agricultural land use in an environmentally sensitive area. The Dow/Conservancy team plans to choose a third pilot site after assessing the findings thus far.

The collaborators are developing methods and tool kits that they hope will be widely applicable and are committed to sharing results publicly. Scientific papers on the Freeport pilot project are being submitted to peer-reviewed journals, said Molnar. A 2012 report summarizes the progress to date.

At a glance, Dow and the Nature Conservancy might seem like odd bedfellows. Prickett said the Conservancy was “ruthlessly pragmatic” and had long worked with industry to leverage its global land acquisition efforts. Nonetheless, in the panel discussion and a joint interview, Hawkins and Prickett acknowledged the difficulties involved in bringing two very different cultures together — Dow’s chemical engineering base and the Conservancy’s committed conservation base. Strong CEO support helped smooth the way (as did Hawkins’ and Prickett’s personal friendship).

Panelist Leslie Carothers, a Pace Law School scholar-in-residence and former president of the Environmental Law Institute, said the collaboration provided “an opportunity to develop credible evidence that ecosystem services really can work.” She believes that the project’s success goes beyond pure economics to the less-tangible reputational value of good corporate citizenship.

“If you save money, that’s great.  But it is also a chance to demonstrate how you are doing something for the environment, working with nature rather than against it,” she said in an interview.

HKS Professor William C. Clark, an environmental scientist who moderated the panel and served on the award selection committee, said the collaboration was “an amazingly rich” experiment with the potential for “finding ways society can value the benefits we get from ecosystem services that are not normally incorporated into the marketplace.” But, he cautioned, such projects are “really hard to do,” and over the long run “the number of failures exceed the successes.”

Supported by an HKS gift from the Boston-based Roy family, the environmental partnership award is given every two years. Director Henry Lee of the Environment and Natural Resources Program said the key element is “transferability. Will it make a difference? ”

The project was selected from 25 global entries in an 18-month process led by Amanda Sardonis, the program’s assistant director.

The award citation recognized the collaboration “for protecting our precious natural resources through the development of replicable, transferable tools that encourage sustainable business decisions. This project demonstrates the highest levels of environmental leadership, setting an example for public, private, and non-profit organizations throughout the world.”

Cristine Russell is a senior fellow in the Environmental and Natural Resources Program, Belfer Center for Science and International Affairs, Harvard Kennedy School.