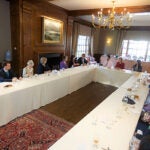 Martin Karplus, the Theodore William Richards Professor of Chemistry Emeritus in Harvard’s Department of  Chemistry and Chemical Biology is one of three to share in the Nobel Prize in chemistry, the The Royal Swedish Academy of Sciences announced this morning.

The Nobel Prize in chemistry 2013 was awarded jointly to Karplus, A.B. ’51, Michael Levitt, and Arieh Warshel “for the development of multiscale models for complex chemical systems,” according to the Nobel committee.

With Karplus’ award, 47 current and former Harvard faculty members have been recipients of Nobel Prizes for wide-ranging work, including the tissue culture breakthrough that led to the creation of the polio vaccine, negotiations that led to an armistice in the 1948 Arab-Israeli War, the first description of the structure of DNA, poetry, pioneering procedures for organ transplants, the development of Gross National Product as a measure of national economic change, and much more.

Prior to that, in 2009, Jack Szostak, a genetics professor at Harvard Medical School and Harvard-affiliated Massachusetts General Hospital, won the Nobel Prize in physiology or medicine. Szostak’s work not only revealed a key cellular function, but also illuminated processes involved in disease and aging.

In 2007, economist Eric S. Maskin ’72, Ph.D. ’76, the Adams Professor at Harvard, received the Nobel Memorial Prize in Economics “for having laid the foundations of mechanism design theory.” Among other applications, that theory has helped economists identify socially valuable trading mechanisms, regulation schemes, and voting procedures.

In 2005, physicist Roy Glauber won for his work on the nature and behavior of light, and Thomas Schelling won in economics for work on conflict and cooperation in game theory. Previous winners in the past decade include Linda Buck in physiology or medicine in 2004, Riccardo Giacconi in physics in 2002, and A. Michael Spence in economics in 2001.