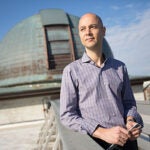 Harvard College today announced a new initiative to encourage promising students from modest economic backgrounds to attend and complete college, whether at Harvard or at other selective institutions. The Harvard College Connection will use social media, video, and other Web-based communications, along with traditional forms of outreach, to connect high school students to Harvard and to other public and private colleges.

This new effort to attract low-income applicants builds on the success of Harvard College’s groundbreaking financial aid program, through which 20 percent of families pay nothing toward the cost of tuition, room, board, or fees. The Harvard College Connection will bolster ongoing efforts to ensure that low-income high school students are informed about their college and financial aid options, at Harvard and elsewhere.

The Harvard College Connection begins operation this fall, with the hiring of additional staff and the launch of a new website that will enable greater use of social and other media.

“Too many of our nation’s outstanding students, particularly those from modest economic backgrounds, fail to attend college or ‘undermatch’ themselves by not considering selective colleges where their chances of graduation would be better,” said William R. Fitzsimmons, dean of admissions and financial aid. About a third of high-achieving high school seniors from the bottom quarter of America’s income distribution attended one of the 238 most selective colleges in a recent year, compared with 78 percent of those from the top quarter.

The U.S. has slipped to 11th among peer countries in the percentage of 25- to 34-year-olds with a degree from a community college or a four-year institution, according to the Organization for Economic Cooperation and Development.

“America’s stature among the world’s leading nations will be greatly diminished in future generations if we do not reverse this trend,” said Fitzsimmons. “Beyond the fact that the economic advantages of graduating from college have never been greater, higher education creates new possibilities which benefit individuals and society in countless ways.”

Harvard admissions officers already travel to more than 140 cities and towns each year — from Washington, D.C., to Los Angeles to Bluefield, W.Va., Fargo, N.D., and El Paso, Texas — to meet with potential students, parents, and guidance counselors. The Harvard College Connection will build on this foundation, connecting prospective college applicants to Harvard undergraduates, staff, and to each other through social media and traditional outreach methods. Such social networks can provide role models as well as practical information about the availability of fee waivers, generous financial aid programs, and clear instructions about how to apply to college.

“To ensure that talented low-income students understand their opportunities, we need to meet them where they are,” Fitzsimmons said. “To date, that has meant literally traveling to meet them in cities and towns across the nation. Going forward, we will meet them both in person and online.”

Seventy percent of Harvard students receive some form of financial aid. A Harvard education is more affordable than a state school for 90 percent of American families.

Partnering with the College Board and Harvard researchers, the Harvard Admissions and Financial Aid Office will share the results of the Harvard College Connection initiative with other colleges and the public. Although Harvard hopes the initiative will support its own continuing efforts to enroll students from modest economic backgrounds, the primary focus of this public policy initiative is to increase college matriculation and graduation rates nationally for such students.

Given the fact that most students attend college within a few hundred miles of their homes, students and staff working with the Harvard College Connection will urge students to consider flagship public institutions and other public and private colleges in their home areas that have high graduation rates and supportive advising. Over the past few decades, more students have responded positively to the substantial increases in financial aid provided by Harvard and other selective colleges, which even include travel allowances from home to college. These national institutions are increasingly diverse geographically, but it remains important for students to become more aware of the opportunities that await them at nearby colleges.

The College Board and its president, David Coleman, are supporting Harvard in this initiative through ongoing efforts to expand access to opportunity to students from diverse backgrounds. “Such students have already demonstrated promise through PSATs, SATs, and other standardized tests in addition to their grades in school,” said Marlyn E. McGrath, director of admissions. “While most of the program’s students will be rising seniors, younger students will also be attracted. We will encourage them to take rigorous high school courses as well as to make thoughtful college plans, thus increasing the numbers of students in the pipeline for all colleges in the years ahead.”

Harvard’s commitment to financial aid has increased dramatically in recent years. Families with annual incomes under $65,000 and normal assets — now 20 percent of the Harvard student body — pay nothing. Those with incomes from $65,000 to $150,000 pay zero to 10 percent of their annual income. Students who work during the academic year, 10-12 hours per week, and bring back money from summer jobs do not need to take out loans.

“The number of families with incomes under $80,000 at Harvard has increased by 33 percent, and the percentage of Pell Grant recipients has grown from 11 to 17 percent of entering classes,” said Sarah C. Donahue, director of financial aid. “Harvard’s easy-to-use online Net Price Calculator demonstrates Harvard’s affordability to families planning for college.” It costs the same or less for 90 percent of American families to attend Harvard compared with flagship public universities in students’ home states.

Harvard’s graduation rate remains high — about 98 percent. Need-based financial grants average $40,000 annually and include travel allowances for trips home each year. The average cost to the 60 percent of Harvard families who receive aid is only $12,000.

“We still have much to learn about how to use the power of social media in encouraging greater access to higher education,” said Perry Hewitt, chief digital officer at Harvard University, who will work directly with the Admissions and Financial Aid Office on the Harvard College Connection initiative. “Certain media may work better with some students than others — and we may also find that some ‘old-fashioned’ outreach such as mail, telephone calls, and travel is more effective — or can be enhanced by new approaches.”

The Admissions and Financial Aid Office is working on the initiative with Christopher Avery, Roy E. Larsen Professor of Public Policy and Management at Harvard’s John F. Kennedy School of Government, Thomas Kane, Walter H. Gale Professor of Education and Economics at the Harvard Graduate School of Education, and Todd Rogers, assistant professor of public policy at the Kennedy School.

“I am delighted to have the opportunity to participate in this effort, which builds in a natural way on Harvard’s existing financial aid initiative,” said Avery. “I am particularly pleased that the Harvard College Connection will encourage students to apply to selective colleges in general, and not just to Harvard. If Harvard College Connection is successful, it could change the lives of many talented students across the country.”