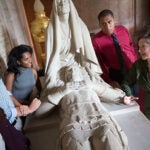 Unnecessary prescribing of antibiotics for sore throat, bronchitis continues at a high rate

For decades, the Centers for Disease Control and Prevention and others have led a significant effort to reduce inappropriate antibiotic prescribing. Despite this work, new research from Harvard-affiliated Brigham and Women’s Hospital (BWH) finds only incremental improvement in the number of antibiotic prescriptions written for adults with acute bronchitis and sore throat. These findings were presented today at IDWeek and the sore throat data was published online in JAMA Internal Medicine.

“We know that antibiotic prescribing, particularly to patients who are not likely to benefit from it, increases the prevalence of antibiotic-resistant bacteria, a growing concern both here in the United States and around the world,” said Jeffrey A. Linder, a physician and researcher in the Division of General Medicine and Primary Care at BWH, the senior author of the paper.

Linder and lead author Michael L. Barnett, an HMS clinical fellow in medicine, measured changes in the prescribing of antibiotics for adults with sore throat and acute bronchitis using nationally representative surveys of ambulatory care in the United States from 1996 to 2010.  The data represented an estimated 39 million adult patients with acute bronchitis and 92 million adult patients with sore throat who visited primary care clinics or emergency departments.

The researchers found that although visits for sore throats had decreased from 7.5 percent of all primary care visits in 1997 to 4.3 percent in 2010, the overall national antibiotic prescribing rate did not change, with physicians prescribing antibiotics at 60 percent of the visits. The rate of emergency department visits by patients with sore throat held at 2.2 to 2.3 percent during that time period. The number of patients visiting with acute bronchitis increased from 1.1 million in 1996 to 3.4 million in 2010.

The data show that prescriptions of penicillin, the antibiotic recommended to treat strep throat, remained at 9 percent, while prescriptions for azithromycin, a more expensive antibiotic, increased from being too infrequent to measure reliably in 1997–1998 to 15 percent in 2009–10.

The researchers also noted an increase in the antibiotic prescribing rate in emergency rooms, from 69 percent to 73 percent, during the same 14-year period.

“In addition to contributing to the prevalence of antibiotic-resistant bacteria, unnecessary use of antibiotics also adds financial cost to the health care system and causes adverse effects for those taking the medication,” said Barnett.  Most sore throats and cases of acute bronchitis should be treated with rest and fluids and do not require a visit to the doctor, he added.

In light of these findings, research efforts are now under way to develop and implement interventions that reduce inappropriate antibiotic prescribing for respiratory infections.