It’s hip in the square 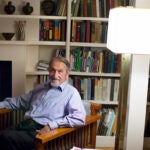 It was 2011, the year that GQ magazine dubbed Boston the least fashionable U.S. city, when Uekermann debuted The Boston Fashionista, a blog chronicling her personal style as well as the city’s fashionable goings-on.

“Whoever says the Boston area has terrible style has never strolled through Harvard Square on a Sunday afternoon,” she said. “You can see a whole range of style, from rockers to vintage, high-fashion to library-chic. When I think of typical Boston style, I think ‘next-generation Brahmin.’ Bostonians nod to classic styles and cuts, but they make those pieces more modern by wearing them in interesting colors and fabrics.”

Uekermann, who was recently named assistant director for faculty and academic affairs in the Department of Stem Cell and Regenerative Biology after serving for 2½ years as a department administrator at the Harvard School of Dental Medicine, is one of a pack of popular, Harvard-connected style bloggers working to change the city’s fashion-backward reputation.

There was Martini Severin, whose Beyond Boston Chic jumped the pond once Severin graduated from the Harvard Graduate School of Education and moved to London. And Emily Xie ’12 and Colin Teo, who founded Books & Liquor in 2010 when they were still undergraduates.

A lot has changed since 2011, though, and The Boston Fashionista has taken off. The fashion brand ECCO has whisked Uekermann away to Copenhagen Fashion Week. She has hosted events with Lucky and Vogue magazines. And last year she partnered with H&M to launch its U.S. website.

Still, an early fascination with style does not a fashionista make. Growing up in Tulsa, Okla., Uekermann hoarded iconic fashion tomes like Vogue while attending Catholic school, where “I wore a plaid skirt and a blazer every day.” She had no experience in translating what she saw in those glossy spreads into real life.

“When I got to college, I had no idea what to wear to class,” she said.

Uekermann eventually figured things out and left Oklahoma for Boston to work on John Kerry’s presidential campaign. She liked Boston so much that she ended up staying. (Her husband is Raymond Coderre, assistant dean for faculty affairs in the Faculty of Arts and Sciences.)

“At the time, I didn’t have any kind of creative outlet, and so I started the blog in March of 2011,” she recalled. “It was really a way to try to meet other people in New England and the Boston area who were interested in fashion. I wanted the blog to be relevant to where I lived, and to feature local designers and local fashion entrepreneurs and shop owners. There’s a lot that goes on around here, but you have to look for it a little bit.”

The Boston Fashionista nets more than 20,000 page views a month, according to Uekermann. Fashionable practicality is key.

“The outfits I wear on the blog are all outfits I wear to work or wear on the weekend,” she said. “It’s all real. And what I discuss on the blog are things that people wonder about: What do you wear when it’s going to be icky in the morning and beautiful later? That’s such a New England thing! What do I do when I have to wear a giant puffy coat for four months out of the year?”

Helping women to achieve stylishness during Boston’s decidedly unglamorous winters is Uekermann’s specialty. Invest in a beautiful, warm coat, she advises. “Make sure it’s the nicest that you can afford because you’ll be wearing it every day for months, and that’s what people will see you in,” she said. “Boston is a city that appreciates the form and function of our clothes — you have to when you’re navigating cobblestone streets in a blizzard! We’re more likely to wear beautiful flat boots than sky-high, cutting-edge stilettos.”

In her new post stem cell post, Uekermann will work with the faculty on appointments, promotions, new faculty initiatives, and policies. It’s serious stuff, but Uekermann argues that fashion is just as vital.

“Sometimes people think fashion is silly or unimportant, but we have to get dressed every morning. We have to wear clothes every day, everywhere we go … So if we’re living our lives in this stuff, why don’t we have some fun with it?”