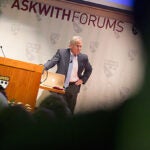 Clean economic growth is not just a pipe dream — it happened in Ireland between 1990 and 2010, when emissions dropped 10 percent even as the country’s economy grew 265 percent, the leader of that country’s Green Party said Monday.

“Ireland … is one of those countries you can point a finger to and say, ‘You can de-carbonize an economy and still develop,’” said Eamon Ryan.

Ryan acknowledged that the growth came in relatively green industries, such as medical devices, finance, and digital technology. But he also said that even in a much slower economy, investment in clean energy continues to pay dividends. Today, Ireland generates 20 percent of its power through wind energy; on windy days as much as half the nation’s power can come from renewable sources.

“We can actually change the energy system,” said Ryan. “It takes time, but what amazes me is how quickly you can start to change.”

Ryan presented Ireland’s story in Mallinckrodt Hall, speaking as part of the Center for the Environment’s “Future of Energy” lecture series. Ryan, who served as energy minister from 2007 until the Green Party was ousted from power in 2011, was introduced by the center’s director, Daniel Schrag, the Sturgis Hooper Professor of Geology and a professor of environmental science and engineering.

One of the lessons from Ireland, Ryan said, is the importance of political consensus around clean energy. While he was energy minister, the parliamentary debate on wind power was more about how much than yes or no.

Ireland had many factors favorable to wind power, Ryan said. The country was highly dependent on foreign fuel, with more than 90 percent of its energy coming from imported fossil fuels. Wind was not just a solution to environmental issues, it also provided the nation with greater energy security.

Also a factor was agreement across Europe that something had to be done on climate change. To address the problem, Ryan said, power has to be de-carbonized — by linking fossil fuels with carbon capture and storage technology, by increasing nuclear power, or by boosting renewables.

For Ireland, heavy use of renewables has been the way to go, Ryan said. The nation has set a goal to get 40 percent of its energy from renewable sources by 2020, a target it will likely meet, he said.

Integrating energy systems across Europe will play a key role in increasing the proportion of renewable power, Ryan said.

Other important steps include pushing to increase the use of electric vehicles, particularly since housing development over the last 20 years has doubled the length of the typical commute. Ireland has already moved to reduce carbon emissions in transportation, taxing vehicles based on carbon emissions rather than cost, a policy that has led to more fuel-efficient cars.

Ireland has also adopted energy-efficient building standards and is working to retrofit existing buildings, with some 250,000 upgraded so far. The nation passed a carbon tax, which allowed a cut in personal income taxes, a change that Ryan said showed the public that the government has its priorities lined up properly. The carbon tax brings in about 1 percent of overall revenue.

Ryan said he believes the next wave in reforming the energy system will focus on eliminating waste. He also said a new energy economy has to offer things, not just take things away.

“The new alternative economy has to be a better economy,” Ryan said. “If we’re going to stop people from going from A to B, you have to have a C.”

One area that needs improvement, he said, is communication on climate change. Advocates for measures to address the issue should admit scientific uncertainty where it exists, admit that the changes — though worthwhile — may be costly, and engage with opponents in a constructive way.

“We need everyone involved. We should stop telling people what to do and start asking people for their help,” Ryan said.