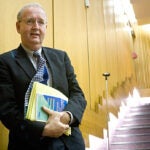 Catching up on health care

They began with a discovery in zebrafish in 2007, and now researchers at the Harvard Stem Cell Institute (HSCI) have published initial results of a Phase Ib human clinical trial of a therapeutic that could improve the success of blood stem cell transplantation. This marks the first time that HSCI has carried a discovery from the lab bench to the clinic, fulfilling the promise of Harvard’s major commitment to such research by founding the institute nine years ago.

The clinical testing is now entering Phase II, which will assess the treatment’s efficacy at eight medical centers with 60 patients. Results are expected in 18–24 months.

Like much of the work conducted under the HSCI umbrella, this “first” depended on the collaboration of scientists at different Harvard-affiliated institutions, and in this case an industrial partner:

“The exciting part of this was the laboratory, industry, and clinical collaboration, because one would not expect that much close interplay in a very exploratory trial,” Cutler said. “The fact that we were able to translate someone’s scientific discovery from down the hall into a patient just a few hundred yards away is the beauty of working here.”

Gastroenterologists have studied dmPGE2 for decades because of its ability to protect the intestinal lining from stress. However, its ability to amplify stem cell populations — the first molecule discovered in any system to have such an effect — was identified in 2005 during a chemical screen exposing 5,000 known drugs to zebrafish embryos. That work, published in the journal Nature in 2007, was conducted by Wolfram Goessling and Trista North, both former Zon postdoctoral fellows and current HSCI principal faculty members.

“We were interested in finding a chemical that could amplify blood stem cells, and we realized in looking at zebrafish embryos that you could actually see blood stem cells budding from the animal’s aorta,” Zon said. “So we elected to add chemicals to the water of fish embryos, and when we took them out and stained the aortas for blood stem cells, there was one of the chemicals, which is 16,16-dimethyl prostaglandin E2, that gave an incredible expansion of stem cells — about a 300 to 400 percent increase.”

The dramatic effects of this molecule on blood stem cells made Zon, a pediatric hematologist, consider ways in which prostaglandin could be applied to bone marrow transplantation, often used to treat blood cancers, including leukemia and lymphoma. Bone marrow contains the body’s most plentiful reservoir of blood stem cells, so patients with these conditions may be given bone marrow transplants to reconstitute their immune systems after their cancer-ravaged systems are wiped out by chemotherapy and radiation.

Zon designed a preclinical experiment, similar to one later done with cord blood patients, in which mice undergoing bone marrow transplants received two sets of competing bone marrow stem cells, one set treated with dmPGE2 and the other untreated.

“What we found was the bone marrow stem cells that were treated with prostaglandin, even for just two hours, had a four times better chance of engrafting in the recipient’s marrow after transplant,” he said. “I was very excited to move this into the clinic because I knew it was an interesting molecule.”

The next step for Zon and his team was to visit Dana-Farber, where they presented the mouse research at bone marrow transplant rounds and found physicians interested in giving the prostaglandin to patients.

“We basically sat down in a room, and we brainstormed a clinical trial based on their scientific discovery, right then and there,” said Cutler. “They knew that it was something they could bring to the clinic, but they just didn’t know where it would fit. We said, if this molecule does what you say it does, significant utility would lie in umbilical cord blood transplants.”

Umbilical cord blood transplants fail about 10 percent of the time. So increasing the procedure’s success would significantly help patients who do not have adult bone marrow donors, including a disproportionate number of non-Caucasian patients in North America. Increasing the engraftment rate would also allow the use of smaller umbilical cord blood units that could be better matches to their recipients, increasing the number of donations that go on to help patients.

Once Fate Therapeutics received the go-ahead for the trial from the U.S. Food and Drug Administration and Dana-Farber’s Institutional Review Board, the umbilical cord blood processing was done by the hospital’s Cell Manipulation Core Facility, directed by HSCI Executive Committee member Jerome Ritz. The study hit a stumbling block, however, once the human trial with the first nine patients got under way. The protocol that produced the dramatic blood stem cell expansion in mice did not translate to improved engraftment in humans.

“The initial results were very disappointing,” Cutler said. “We went back to the drawing board and tried to figure out why, and it turned out some of the laboratory-based conditions were simply not optimized, and that was largely because when you do something in the lab, the conditions are a little bit different than when you do it in a human.”

Fate Therapeutics discovered that the human cord blood was being handled at temperatures of 4 degrees Celsius — too cold for the prostaglandin to biologically activate the stem cells and improve their engraftment properties. The company further demonstrated that performing the incubation of the hematopoietic stem cells at 37 degrees Celsius and increasing the incubation time from one to two hours elicited a much stronger gene and protein expression response that correlated with improved engraftment in animal models.

In running a second cohort of the Phase Ib trial, which included 12 patients, dmPGE2 appeared to enhance the engraftment properties of the blood stem cells in humans and was deemed safe to continue into Phase II.

“It’s probably the most exciting thing I’ve ever done,” Zon said. “Basically, to watch something come from your laboratory and then go all the way to a clinical trial is quite remarkable and very satisfying.”

The research was funded by the National Institutes of Health, the Howard Hughes Medical Institute, the Stem Cell Cyclists of the Pan-Mass Challenge, and the Patrick Carney Foundation.