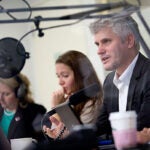 Study examines influence of moonlight on predators and prey

It sounds like a scene straight from “Mutual of Omaha’s Wild Kingdom” — by day, lions lounge under shade trees, but by night, the big cats rule the savannah, relying on a combination of exceptional vision and moonlight to bring down unsuspecting prey.

For all its ubiquity, though, it’s a story that may not be as accurate as many people believe.

New research suggests that, despite the advantage moonlight would seem to provide hunters, predators such as lions are actually less active on the most moonlit nights, while many prey animals — despite the risk of being eaten — become more active. The study was published this month in the Journal of Animal Ecology.

“The results were very counterintuitive,” said Chris Golden ’05, a postdoctoral fellow at Harvard’s Center for the Environment and a co-author on the study. “Most people would believe that predation risk increases on moonlit nights, because predators have an easier time seeing prey. What they ignore is the very intuitive second half of that thought, which is that if predators can see better in the moonlight, why would prey not also have better vision and then be able to avoid predators?

“What we found in this study is that this benefit goes both ways,” he added. “We also found that the primary sensory system of the organism was one of the best predictors of their response to moonlight. If they are using sight to detect predators, as opposed to olfaction or auditory signals, they were generally more active on moonlit nights.”

To understand the effect of moonlight on different species, Golden and first author Laura Prugh, an assistant professor at the University of Alaska Fairbanks, compiled the results of studies on 58 nocturnal species, ranging from the highly lunarphilic red-fronted brown lemur (Eulemur fulvus rufus) to the highly lunarphobic Merriam’s kangaroo rat (Dipodomys merriami).

Their initial hypothesis, Golden said, was that the benefits of moonlight would be strongest for animals at the highest “trophic level” — those at the top of the food chain — because they face few predators and moonlit nights would offer them the best chance to catch prey.

“What we actually found was that the highest trophic levels reduce their activity in moonlight,” Golden said. “One of the potential theories is that they are acting in response to reduced activity by prey, or reduced hunting success, since their prey can detect them more easily, so they’re not going to waste their energy by hunting on those nights.

“We also found very strong phylogenetic association with the effects of moonlight. Activity among carnivores was reduced, as well as among rodents, bats, and lagomorphs [hares and rabbits]. Primates, on the other hand, were one of the few groups to see a major increase.”

Golden said he hopes the study spurs further research into questions of how and why moonlight affects behavior patterns, and whether animals living in close proximity to cities — and the light that comes with them — show similar behavior changes.

“I think this paper serves as a preliminary analysis that begs for more research,” Golden said. “There are complex dynamics in these systems that we’re not picking up, but this paper is asking the questions.”