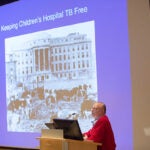 A simple, color-coded system for labeling food items in a hospital cafeteria appears to increase customers’ attention to the nutritional value of their food choices, and encourage the purchase of the healthiest items. In a report in the October issue of Preventive Medicine, investigators at the Harvard-affiliated Massachusetts General Hospital (MGH) describe customer responses to surveys taken before and after the 2010 implementation of a system using green, yellow, or red “traffic light” labels to reflect the nutritional quality of items.

“Several small, experimental studies have suggested that ‘traffic light’ labels can be an effective method of promoting healthier choices, but there have been few real-world studies of customers’ perceptions and purchasing behaviors in response to this type of labeling,” explained Lillian Sonnenberg of MGH Nutrition and Food Service, the corresponding author of the report.  “Our results suggest that these labels are an effective method for conveying information about healthy and unhealthy choices and for prompting changes in purchasing behavior.”

While many restaurants and other food-service locations are now posting the calorie content of their standard items and making detailed information — such as fat, cholesterol, and sodium content — available on request, the researchers noted that interpreting this information requires knowledge and skills that many do not possess.  To find a simpler way to encourage more healthful purchases at the hospital’s food-service locations, MGH Nutrition and Food Service put together a plan that started with color-coding each item sold in the main cafeteria — green for the healthiest items, such as fruits, vegetables and lean meats; yellow for less healthy items; and red for those with little or no nutritional value.  Signage encouraged frequent purchase of green items, occasional purchase of yellow-coded foods, and discouraged purchase of red items. Cafeteria cash registers were programmed to record each purchased item as green, yellow, or red, starting three months before the labeling intervention began.

Previous reports from the MGH team had described how the program — a second phase of which included rearranging items in refrigerators to bring healthy choices to eye level — increased sales of green items while decreasing purchase of red items. The current paper reports the results of a survey taken during the month before and the two months after the labeling intervention started in March 2010.  Research coordinators approached customers who had just made purchases and asked them to participate in the brief survey. Participants were asked whether they had noticed any nutritional information in the cafeteria or on food labels, which factors most influenced their purchases, how often they considered nutrition information before making food choices, and how often they chose “food that is healthy.”  After the color-coded labels were introduced, respondents were also asked whether they had noticed the labels and if the labels had influenced their purchases.

During the baseline period before the labeling intervention, 204 individuals completed the survey; 243 did so in the weeks following. While 46 percent of the respondents indicated that health/nutrition was an important factor in their choices at baseline, 61 percent did so after the intervention.  The percentage of those indicating that they looked at available nutritional information before a purchase doubled from 15 to 33 percent, although there was no significant difference in the percentage who said they usually or always chose healthy foods.  Respondents who reported noticing the new labels bought a greater proportion of green items and fewer red items than did those who did not notice them, and the change was even more striking among those who said they were influenced by the labels.

“While our results can’t give concrete information about customers’ nutritional knowledge, people were more likely to indicate that health and nutrition were important factors in their decision when the labels were in place, and those who noticed the labels were more likely to purchase healthy items,” Sonnenberg said. “Although we haven’t directly compared these ‘traffic light’ labels to other systems, we can say that these labels appear to be more effective than the standard nutritional labeling available on packaged products. The strategy is simpler for customers to understand at the point of purchase and, once the appropriate labels for each item are determined, is relatively easy to implement.”

The labeling system — along with second phase of adjusting the way items are positioned, which was not included in the current study — is now in place at all MGH food-service locations.  Co-authors of the Preventive Medicine article are Susan Barraclough and Emily Gelsomin of MGH Nutrition and Food Services; Anne Thorndike, MGH division of General Medicine; Douglas Levy, Mongan Institute for Health Policy at MGH; and Jason Riis, Harvard Business School.