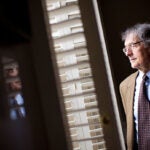 Howard Gardner: ‘A Blessing of Influences’

In Emerson Chapel, where Ralph Waldo Emerson delivered his groundbreaking 1838 Commencement address to the Harvard Divinity School (HDS), a small group of students sat quietly on yoga mats and hassocks. Beneath a marble tablet inscribed with words from Emerson’s controversial speech, in which he challenged mainstream Christianity by exhorting students to “cast behind you all conformity, and acquaint men at first hand with Deity,” instructor Chris Berlin advised the weekly Wednesday meditation group to ignore thoughts or distractions, and “simply ride the waves of your breath.”

When Emerson gave his famous address, he discussed the failures of what he called “historical Christianity” and argued instead for an idealistic view of human reason and goodness. At a time when Harvard was considered the center of Unitarian thought, Emerson’s speech was harshly criticized; the press called it “utterly distasteful.” Emerson would not be invited to speak there again for several decades.

Emerson was surprised by the outcry that followed his speech. He continued his interests in nature, mysticism, individualism, and freedom. He became an eloquent spokesperson for the abolitionist movement and was a major figure in the American romantic literary and philosophical movement known as Transcendentalism.

The room where the controversy began is now a meeting place for a number of diverse religious and spiritual groups. The Harvard Buddhist Community, HDS Catholics, Quakers, Lutherans, and Humanists all meet in Emerson Chapel. Berlin, who leads the meditation class, is a former chaplain for cancer patients, and teaches an HDS class in the chapel called “Compassionate Care of the Dying: Buddhist Training and Techniques.” The space, he says, creates a very different tone for his class, one that would not be possible in a classroom.

The philosophy of the Divinity School is to “build a community and, ultimately, a world in which people can peacefully live and work together across religious and cultural divides.” Emerson, despite the protests about his 1838 address, would likely approve of the diverse spiritual approaches practiced in this contemplative corner of Harvard that Kerry Maloney, HDS director of religious and spiritual life, calls “the jewel of the Divinity School.”