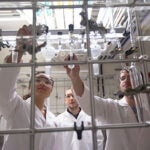 The Harvard Crimson kicked off the home season this past weekend with a second win, followed by two Crimson players earning Ivy League awards.

“We are off to a solid start at 2-0,” said head football coach Tim Murphy, “but we have a great deal of room for improvement, and we are focused on … our next game [Holy Cross].”

Yet it was under the bright lights of Harvard Stadium this past Saturday that the Crimson defeated Brown University, marking Harvard’s first Ivy League game of the year.  On Sept. 21, Harvard beat San Diego, 42-20. It was the first time since 1949 that the Crimson had ventured to the West Coast.

For local fans, Harvard won’t have another home game until Oct. 19, when the Crimson return to Harvard Stadium to play Lafayette.

During halftime at the Brown game, children took advantage of the beautiful fall evening and turned cartwheels just outside the end zone, waving as grandparents snapped pictures. Undergraduates clustered in groups, snacking on barbecue. Nearby, parents played catch with their kids, throwing their own small spirals under the lights of the stadium. Alumni and students mingled, musing as to how the game would play out.

Howard Ireland, from Sharon, Mass., said his son, Matt, had bought two tickets and treated him to the game. As the duo watched the Harvard University Band perform at halftime, Ireland observed that Brown would have to score decisively in the third quarter if the Bears were going to come back.

Cathryn Clüver, a ’99 Brown graduate and a 2010 graduate of the Harvard Kennedy School (HKS), stood firmly on the visiting team’s side of the stadium, cheering for her alma mater. She said one of the joys of the event was being part of such a diverse turnout.

“I’m sitting behind a Brown [alum] and a former Brown football player from the Class of 1942, and he’s sitting next to parents of a student who’s playing” for the [Brown] Bears, said Clüver, executive director of the Future of Diplomacy Project at HKS. “We have a dynamic cheering section, I feel like I’m out with my tribe … and the band’s playing fight songs I know how to sing, which is always great.”

Despite the loss, Clüver remained hopeful for the remainder of Brown’s season. “Harvard is up there for a reason,” she said, speaking of the conference standings. “But we came out strong, and we put up a good fight.”

More than 17,000 fans attended the game, which was nationally televised.