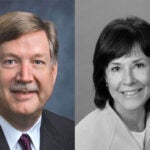 James E. Rothman, a 1976 Harvard alumnus, won a share of the 2013 Nobel Prize in physiology or medicine Monday for work illuminating the internal machinery that cells use to transport molecules. The Yale University professor split the award with Randy Schekman of the University of California at Berkeley and Thomas Südhof of Stanford University.

Rothman, a native of Haverhill, earned his Ph.D. in medical sciences, in a degree program jointly offered by the Graduate School of Arts and Sciences and Harvard Medical School.

The award, announced early Monday by the Karolinska Institutet in Sweden, was given to the trio “for their discoveries of machinery regulating vesicle traffic, a major transport system in our cells,” according to the citation.

Rothman, Schekman, and Südhof’s work showed how key molecules manufactured by cells are transported within the cell in capsules called vesicles and delivered to specific locations at the right time to have a particular effect. Rothman’s work, begun at Stanford University in the years after he left Harvard, explained how proteins on the vesicle attach to complementary proteins on the target membrane. The vesicle then fuses with the membrane and releases its molecular load.

The Nobel Committee said the discoveries that led to the prize unveiled “a fundamental process in cell physiology” that underlies a wide array of cellular functions, from the passage of neurotransmitters from one nerve cell to another to the release of insulin into the bloodstream.

Joan Brugge, Pfeiffer Professor of Cell Biology and chair of Harvard Medical School’s Department of Cell Biology, called Rothman an “extraordinary scientist” and described his experiments as “elegant and ingenious.”

“Jim Rothman is a giant in this area — he has enlightened the world with his discoveries of how vesicles transport protein cargo from one compartment of a cell to another and how this process is optimized in neurons to allow millisecond release of neurotransmitters,” Brugge said. “Jim is an extraordinary scientist, who brings quantitative biochemical rigor to questions in cell biology. The approaches that he used to reconstruct vesicle transport events outside the cells in order to model and test mechanisms involved in intracellular trafficking are elegant and ingenious.”