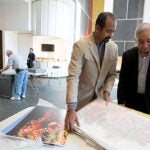 There was talk of forgery and corruption in Harvard’s Rosovsky Hall Friday, but it didn’t spark an investigation. Rather, the corruption was of the heavens four centuries ago, while the forgery — of a document purportedly by Galileo — was uncovered in 2005.

Scholars, artists, and musicians gathered at Harvard for a wide-ranging conference to mark the 400th anniversary of Galileo’s insights on sunspots.

The event, organized by Peter Galison, the Joseph Pellegrino University Professor, aimed to humanize the famed Italian astronomer, considered a father of modern science, and detail the times in which he lived.

Sunspots are known today to be extremely violent eruptions on the face of the sun caused by magnetic activity. Though they measure thousands of degrees, the spots are cooler than the surrounding areas. Associated coronal mass ejections can disrupt communications on Earth and intensify aurora activity.

At the time of Galileo, however, it was widely assumed that the heavens were perfect, causing a great deal of resistance to the idea that the sun might be blemished.

Galileo was a lute player to whom the arts were an important part of life, so the conference incorporated the arts to help explain his work. It featured a dramatic work by graduate students at the American Repertory Theater and a musical performance, “Galileo’s Muse.” Galileo grew up in a musical family — both his father and brother were lute players and composers — and his insights into the acceleration of gravity have been linked to his musical sensibilities.

Aside from the role of the arts in Galileo’s life, the broad impact of his work was best reflected by a conference reaching across disciplines, Galison said.

The drama, “The Greatest Witness,” was created by grad student Stephanie Dick, who assembled the reading from period poetry, a 1945 play about Galileo, and Galileo’s own writing.

Though sunspots were observed before Galileo, he correctly explained what he saw, engaging in an ongoing argument with a Jesuit astronomer, Christoph Scheiner, who believed the spots were small planets passing across the face of the sun, a position that preserved the sun’s perfection.

Among other subjects, speakers at the conference provided details of the argument with Scheiner, examined Galileo’s research during the key month of June 1612, and highlighted how the common use of pseudonyms at the time still complicates research.

Galileo’s explanation that the spots were actually blemishes on the sun clashed with the Catholic Church’s firmly held belief that the heavens were perfect. These views added to his troubles with church over his insistence that Nicolaus Copernicus was correct: The Earth was not at the center of the universe, but, instead, revolved around the sun.

“He went way beyond anything Copernicus imagined,” Galison said. “Galileo went out of his way to say you should take this seriously.”

Among the speakers was Nick Wilding of Georgia State University, who in 2005 helped uncover the forgery of a document that had been attributed to Galileo. Wilding said the forgery was very good, but that tiny details — missed by earlier experts who had authenticated the document — gave it away. Wilding said that modern technology has proved an asset to forgers and presents trouble for historians.

“We face a crisis as historians, as we deal with sources,” Wilding said. “We’re getting close-to-perfect forgeries.”

The event was co-sponsored by the Mahindra Humanities Center at Harvard, the Italian Consulate-General in Boston, Museo Galileo of Florence, the Office of the Dean of the Division of Arts and Humanities at Harvard, and the Italian engineering firm Trevi Icos, which has worked on several Harvard buildings, including the Fogg Museum, and the Northwest Lab building.