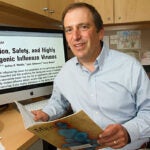 And then there was the food.

“I went home and went to the larder and ate everything I could see. Went out and met my sister and a friend at a restaurant and had a large dinner. Then went to another pub and had some food there. Then went to another pub and had more food. Went back to the first pub and found a good mixture of drinks — barley wine and mild ale. Then I had a dish of prunes and custard into which a bottle of ale had also been poured. I rejoined my sister and had another meal. Then back to the pub and had a large mixture of various snacks. While I was there, some German guards arrived with more prisoners.”

For World War II POWs imprisoned in a converted castle in Laufen, Germany, the stuff of dreams included impressive helpings of food, as well as family members, escape, and an overwhelming sense of the tedium of camp life.

That was the result of a study by a group of Harvard undergraduates who spent several months probing the dreams of 79 British officers captured during the Battle of France and interned at Laufen between 1940 and 1942.

The unusual study was conducted under the tutelage of Deirdre Barrett, an assistant clinical professor of psychology in the Department of Psychiatry at Harvard Medical School (HMS) and at Harvard-affiliated Cambridge Hospital. The work — presented at a dream-research conference in Berkeley, Calif., last year and set to be published this fall in the journal Imagination, Cognition, and Personality — resurrected a study begun by a captured British officer who died before being released from camp.

Barrett came across the dream journals during the summer of 2011, while teaching a Harvard Summer School course abroad at University College, London. She had arranged for the students to have access to several local archives for the class, including the Wellcome Collection in London. Barrett had met the collection’s director, onetime Harvard doctoral student Ken Arnold, when he returned to campus to deliver a lecture.

Wellcome staff had collected various materials related to dreams for the class, including the Laufen journals, which had never been studied. They immediately caught Barrett’s eye, and she copied their pages for later analysis.

“There are materials there that no researcher has ever looked at,” Barrett said. “The prisoner dreams immediately grabbed my attention.”

The journals were compiled by Maj. Kenneth Hopkins, who had hoped to use them after the war for his doctoral dissertation at the University of Birmingham. He kept daily notes about the dreams of 79 fellow prisoners, recording some 640 dreams in six volumes. One volume was lost in subsequent years, so the study by Barrett and the students was based on the remainder: 492 dreams recorded in five journals.

Two years into captivity Hopkins died of emphysema. After the war, the journals were forwarded to his doctoral adviser, Charles Valentine, and they eventually made their way to the University of Birmingham Library, and then to the Wellcome Collection.

In the spring of 2012, Barrett asked students from her freshman seminar on dreams whether they were interested in helping analyze the work. Five — Angela Oh, Jasmine Panton, Zach Sogolow, Malcolm Grayson, and Melanie Justiniano — jumped at the chance. Over the next few months, they read through the journals, coding them for common elements, and then conducted a statistical analysis.

What struck Barrett is that the dreams more closely resemble those of prison inmates than those of soldiers who have experienced battlefield trauma. Barrett said that difference likely reflects the fact that Germans treated the captured officers relatively well, according to the Geneva Conventions, and that the men were captured early in the war, during the brief Battle of France, and so didn’t see a lot of combat. It’s likely that many were on their first action.

“I was surprised that they didn’t look more like other wartime trauma populations,” Barrett said. “It was striking that they did have these features you see in prison dreams. … They’re bored to tears and longing to get out, nostalgic for the people back home.”

Specifically, the dreams showed significantly fewer females, friends, and animal characters and more male, family, and dead characters than those of a standard population described in a 1966 study that is used as a benchmark for dream content. The dreams also showed less aggression, friendliness, sexuality, and striving than are typical.

When the POWs dreams did contain violence, it was often extreme and realistic — battlefield violence, shooting, stabbing, and killing — compared with the standard male population, where dreams of aggression are more frequent but consist of arguing, insulting, and pushing. Sexual dreams also appeared to have been marked by captivity and featured distant, unattainable women, such as the wife of an officer or an aristocrat.

Escape was another feature of the dreams and reflected diverging attitudes toward escape in camp: that it was one’s duty or that it was perilous, and pointless, since the war was unlikely to last long, Barrett said. The records included two members of the Laufen Six, a group of officers who were recaptured after escaping from Laufen and then sent to the prison camp at Colditz, thought by the Germans to be difficult to escape from. Their successful escape from Colditz brought the officers fame, resulting in books, a movie, and a board game based on their exploits.

For the students, now juniors, the study offered an opportunity to engage in in-depth research in a way that is often difficult inside the constraints of a semester, Barrett said. Because the data had already been gathered, the project allowed students to jump right to the analysis stage, giving them real-world experience within a manageable time frame.

Jasmine Panton, a Cabot House junior concentrating in history and literature, said the study allowed her to delve further into her interest in dreams and to highlight an area of dream research that is not well explored.

Many of the 200 to 300 dreams she read and coded were quite sad, Panton said, and the level of intimacy she felt with the men was haunting. The study triggered at least one new dream, in which Panton was in a POW camp herself, being chased but unable to run or scream.

Angela Oh, a Leverett House junior and a neurobiology concentrator, also coded hundreds of dreams and said the experience was like reading a novel, one that offered a very personal picture of the prisoners’ experience.

Oh, who made a presentation on the work with Barrett at the 2012 dream conference, is continuing to pursue her interest in dreams and is working with Barrett on another project, comparing transcripts of sleep-talking episodes with subjects’ recollections of their dreams.

While the Laufen work doesn’t replicate the study Hopkins had envisioned, Barrett said it did have a feeling of reviving something long hidden.