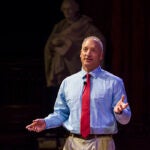 “We celebrate public service and its importance to this University,” Harvard President Drew Faust told an audience of 200 students, faculty, staff, and alumni, at the Memorial Church on Friday. “Phillips Brooks House Association (PBHA) is the heart of these efforts at the College. … It is essential to fulfilling the public trust.”

So, in a tradition that is still young, Faust presented the seventh annual Robert Coles Call of Service Award to U.S. Secretary of Housing and Urban Development Shaun Donovan ’87, M.Arch. ’95, M.P.A. ’95.

Donovan’s service to the country has deep roots at Harvard. He once worked at the Harvard Square Homeless Shelter, the nation’s first student-run homeless shelter, which is celebrating its 30th anniversary.

Donovan also studied with Coles ’50, a professor of psychiatry and medical humanities emeritus in the Department of Psychiatry and a longtime champion of underprivileged children, who was sitting in the front row. Coles’ legacy, said Maria Dominquez Gray ’94, Class of 1955 Executive Director of the PBHA, is “a positive reminder of the difference we can make in the world.”

“For three decades since [President Ronald] Reagan, the student volunteers [at PBHA have] provided welcome hospitality to Cambridge’s most vulnerable,” said Philip Mangano, director of the American Roundtable to Abolish Homelessness, in his tribute to Donovan. The moral compass that Donovan shaped while a student, Mangano continued, is now used in high office, where Donovan has “preserved the legacy that works, discarded what doesn’t” with a “percolating restlessness to make what’s wrong right.”

After Mangano’s glowing speech, Donovan rose, saying, “I’m honored. There is no higher compliment than being recognized for service.”

Donovan told how he grew up in New York City in the 1970s, as the city was going bankrupt. The South Bronx lost 75 percent of its population in 10 years, and “what was most troubling was that people had come to accept and expect people living on the street. How is this possible in the wealthiest city in the wealthiest country on Earth?” he asked himself at the time.

When he got to PBHA, he learned he wasn’t alone with his questions. Still, he said, the homeless often remained invisible to him — they became one undifferentiated mass — until he started working with them and saw their humanity, and pieces of himself in them.

“People and issues were being ignored,” he said. “I volunteered in the homeless shelter for three years, and channeled my childhood sense of injustice.”

He read “Invisible Man” by Ralph Ellison, which says that “For every invisible man, there is a person who is blind,” an idea that has shaped Donovan’s work in housing the homeless and in his time as secretary.

“Over time, with careful research, we have begun to see that the homeless can be made visible, and we can tailor our strategies to meet the needs of every individual,” he said, adding that this is “even more important today.”

“Today, technology has opened miraculous possibilities. … What has tech done to [our] ability to see the other? Life is so fast that we are challenged to take the time to really know people who are different from us.”

“You students who are here,” he continued. “Do you really see me? Do you see the secretary? A bureaucrat? Someone different from yourselves? This person standing here sat there” — in the audience — “30 years ago. I had never imagined when I sat there mesmerized that I’d deliver a lecture” to Professor Coles, “getting an award in his name. It is too easy to see someone standing up here as someone different from you, as different in some way — as if I knew I wanted to be secretary of HUD someday.

“All of us have different paths to find our way. I can’t tell you what to do. But I can tell you to serve. Everybody can be great, because everyone can serve,” he said, quoting Civil Rights leader Martin Luther King Jr. “If you serve, you will know yourself. I ask each and every one of you to serve. Call yourself to be more than you think you can be.”

The award is named for Coles, a winner of the MacArthur Award, the Pulitzer Prize, and the Presidential Medal of Freedom, among other distinctions. He has inspired the lives of countless people, and PBHA is “proud to hold this lecture and award as thanks for his continual and unending support.”