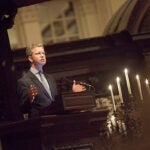 Reischauer and Rubin to step down from Corporation, Lee to become senior fellow

Reischauer, president emeritus of the Urban Institute, and Robert E. Rubin, A.B. ’60, former U.S. treasury secretary and now co-chair of the Council on Foreign Relations, each plan to step down on June 30, 2014, after 12 years of service, consistent with the norms recently adopted by the Corporation.

Reischauer, senior fellow since 2010, has played a leading role in advancing the set of historic governance reforms approved in December 2010.

Lee, a member of the Corporation since 2010 and a distinguished intellectual property expert at the law firm WilmerHale, was elected by his Corporation colleagues to become senior fellow as of July 1, 2014.

Reischauer, who grew up in Cambridge and Belmont, Mass., before graduating from Harvard College in 1963, joined the Corporation in 2002 after a six-year term on Harvard’s Board of Overseers. Along with President Drew Faust, he guided the wide-ranging review that led to recent years’ governance reforms, intended to expand the Corporation’s capacity and intensify its focus on issues of long-term strategy and policy. The changes included expanding the Corporation from seven to 13 members and creating new committees on facilities and capital planning, finance, and governance.

“I have long treasured my relationship with Harvard,” said Reischauer. “It has been a particular privilege to work with Harvard’s presidents and my Corporation and Overseer colleagues to strengthen the University during these times of unprecedented challenge, promise, and institutional change. Together we have sought to ensure that Harvard continues to be the leader in a rapidly changing environment. The world needs the best possible education and research, and that makes the aspirations and creativity of Harvard’s remarkable faculty, students, and staff all the more crucial.”

“Bob Reischauer has been a deeply dedicated and extraordinarily effective senior fellow, guiding the Corporation through a time of transformative change,” said Faust. “His legacy, as the senior fellow who did so much to shape and implement our recent governance reforms, will carry on for decades ahead. I’m immensely grateful for his leadership, his insight and counsel, and his unwavering personal support.”

Now a distinguished institute fellow and president emeritus of the Urban Institute, a nonpartisan economic and social policy research organization in Washington, D.C., Reischauer served as the institute’s president from 2000 to 2012. From 1989 to 1995, he was director of the Congressional Budget Office (CBO). Both before and after his tenure as CBO director, he was a senior fellow at the Brookings Institution.

A member of the American Academy of Arts and Sciences, the Institute of Medicine, and the National Academy of Social Insurance, Reischauer is a recognized policy expert on the federal budget, Medicare, Social Security, poverty, and welfare. He is one of the two public trustees of the Social Security and Medicare trust funds, was vice chair of the Medicare Payment Advisory Commission from 2001 to 2008, and serves on the boards of several educational and nonprofit organizations. He received his master of international affairs degree (1966) and his Ph.D. in economics (1971), both from Columbia.

“Harvard has thrived over decades through a willingness to aim high and to embrace change,” Rubin said. “That outlook will remain crucial, as global competition intensifies and as Harvard seeks to link its Schools and engage complex challenges in novel ways. I have greatly valued my time on the Corporation and the opportunity to serve an institution whose activities and aspirations represent American universities’ immensely important role in the world and the value of higher education for the individual and for society.”

“Bob Rubin has constantly enhanced the Corporation’s deliberations with his incisiveness, his commitment to excellence, and his rare mix of perspectives from public service, finance, and global affairs,” said Faust. “He has been a strong voice in encouraging efforts to connect Harvard’s different parts and in pressing to assure that Harvard does all it should to assure its leadership for the long term. I very much appreciate his thoughtful, farsighted service to the University.”

Now the co-chair of the Council on Foreign Relations, Rubin served as the nation’s 70th secretary of the treasury from 1995 to 1999. From 1993 to 1995 he was assistant to the president for economic policy and the first director of the National Economic Council. He earlier spent more than 25 years at Goldman, Sachs & Co., where he rose to become co-senior partner and co-chairman from 1990 to 1992. After leaving federal service, he was a member of the board of directors at Citigroup and a senior adviser to the company from 1999 to 2009. He chairs the board of the Local Initiatives Support Corporation, a leading community development support organization, and is co-founder of the Brookings Institution’s Hamilton Project. He also serves on the board of trustees of Mount Sinai Medical Center.

A summa graduate of Harvard College in 1960, Rubin received his LL.B. from Yale in 1964. He holds honorary degrees from both Harvard and Yale, among other universities, and is the author of “In an Uncertain World: Tough Choices from Wall Street to Washington” (2003, with Jacob Weisberg).

Lee is a partner and former co-managing partner of Wilmer Cutler Pickering Hale and Dorr, one of the nation’s most prominent law firms, with some 1,000 lawyers and 14 offices in the United States, Europe, and Asia. He is a leading intellectual property (IP) litigator who has represented a wide range of technology-focused clients over more than 35 years. His scores of trials and appeals have focused on such diverse matters as smartphones, laser optics, secure Internet communications, pharmaceutical products, medical devices, and genetically engineered food.

“Bill Lee’s wisdom and humanity, his blend of imagination and pragmatism, and his savvy about organizations and about people make him an exceptionally effective and admirable leader,” said Faust. “His interests, concerns, and relationships range across the University, and he knows that innovation is one of Harvard’s proudest traditions. All of us on the Corporation consider ourselves fortunate to have, in Bill Lee, so worthy a successor to Bob Reischauer.”

“I am deeply honored and humbled to have been chosen to serve as senior fellow,” said Lee. “Harvard is the most extraordinary academic institution in the world, and I look forward to working with our president, my fellow Corporation members, and the broader Harvard community to ensure that it remains so. Bob Reischauer has been a wonderful leader, pioneering fundamental changes in our governance. I can only hope that we will build upon all he has accomplished.”

A member of Harvard’s Board of Overseers from 2002 to 2008, Lee was chair of the board’s committee on finance, administration, and management; vice chair of its executive committee; and one of the Overseer members of the presidential search committee in 2006-07. He joined the Corporation in 2010 and serves as chair of the Joint Committee on Inspection; he is also a member of the Corporation committees on governance, facilities and capital planning, and shareholder responsibility. He has taught intellectual property litigation at Harvard Law School (HLS), as well as the January problem-solving workshop that HLS introduced in 2010.

After graduating from Harvard College in 1972, Lee received his J.D. and M.B.A. degrees from Cornell in 1976. He joined the Boston law firm Hale and Dorr and went on to become chair of the litigation department and then managing partner of the firm. He steered the firm’s 2004 merger with Wilmer, Cutler & Pickering, then served for seven years as the new firm’s co-managing partner.

A fellow of the American College of Trial Lawyers, Lee maintains an active trial practice nationwide. He has served on numerous advisory committees to federal and state courts, was associate counsel in the Iran-Contra investigation from 1987 to 1989, and in 1988 served as special assistant to the Massachusetts attorney general for purposes of investigating alleged racial bias in the courts.

The Harvard Corporation, formally known as the President and Fellows of Harvard College, is Harvard’s principal fiduciary governing board and the smaller of Harvard’s two boards, the other being the Board of Overseers.

Nominations and advice regarding future Corporation appointments may be sent, in confidence, to corporationsearch@harvard.edu.