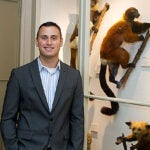 Public health officials from China and the United States gathered at Harvard’s Longwood campus Thursday to compare notes on the health challenges facing the two global giants, including noncommunicable diseases such as diabetes, heart disease, and cancer, and how best to extend health care to every citizen.

Nils Daulaire, assistant secretary for global affairs at the U.S. Department of Health and Human Services (HHS), said that health within nations is increasingly a global issue, since virtually any person or manufactured product can move around the world in a day, carrying diseases and cures.

Half of U.S. medical devices and 80 percent of pharmaceutical components are imported, Daulaire said, as is half of the fruit and three-quarters of the seafood consumed in this country.

Rapid exchange of people means that new diseases and drug-resistant versions of older ones can arrive in any nation without warning.

“More than a million people a day drive across our borders, dock in our ports, and land in our airports. This international travel of goods and people exposes us to the threat of novel diseases and old diseases, which have been largely forgotten here or developed resistance to our established treatments,” Daulaire said. “Thus, in today’s globalized world, ensuring the health of those in the U.S. and China necessitates working with our counterparts and colleagues around the world. As [HHS] Secretary [Kathleen] Sebelius often says, we can no longer separate global health from Americans’ health. We need to look beyond our borders to improve health in our country.”

Daulaire spoke at the 2013 U.S.-China Health Summit, an all-day event at Harvard’s Joseph Martin Conference Center co-sponsored by the Harvard School of Public Health (HSPH) and Peking Union Medical College. The event was supported by HHS, the Centers for Disease Control and Prevention (CDC), China’s National Health and Family Planning Commission, the China Food and Drug Administration, and the Chinese Center for Disease Control and Prevention.

The event’s theme was “Preventive Medicine and Public Health,” and several speakers addressed the importance of developing health systems that include strong primary care components as a way to keep people healthier and catch ailments before they become serious.

“Both the U.S. and China are facing some serious problems in public health, closely related to the significant demographic, epidemiological, and disability changes,” Liu said. “We can be reactive to those changes, but we can be also proactive. As the old Chinese saying goes, the best doctor is the one who prevents diseases.”

Qing Yang, director-general of rural and community health for China’s National Health and Family Planning Commission, outlined that nation’s recent reforms to its health care system and the new emphasis on primary care, particularly in rural health clinics. The health reforms have extended health insurance to 95 percent of the population, Yang said. Yang said health officials are working to reach the remaining 5 percent.

In looking at recent developments in global health, Daulaire said the global response to the HIV/AIDS epidemic has strengthened health care systems in afflicted countries, while the disease’s transition from a deadly acute ailment to one that can be managed with drugs has required development of infrastructure to support the continued care of millions of HIV patients.

Daulaire and other speakers said the United States and China face similar challenges as noncommunicable diseases (NCDs) spread around the world. While ailments such as cancer, diabetes, and heart disease have been prominent in the United States for decades, they are increasingly prevalent elsewhere, including in China.

“We know you do not want to follow us down the road of delayed response and tertiary care that has taken 18 percent of our economy to health care costs,” Daulaire said, emphasizing the importance of preventive care and lifestyle changes in addressing NCDs.

Though NCDs are often thought of as diseases of the wealthy, Daulaire said that today they disproportionately affect people in low- and middle-income nations, where they tend to strike earlier in life.

HHS and the World Health Organization (WHO) have formulated a global action plan that seeks a 25 percent reduction in premature deaths from these ailments by 2025, Daulaire said. This would be achieved by strengthening health systems and reducing risk factors for individual ailments, taking particular aim at tobacco use.

For example, the China-U.S. Workplace Challenge has signed up 50 Chinese companies and 16 U.S. companies working in China to create smoke-free workplaces there, Daulaire said. Through programs like this, global health has become an important foreign policy tool, Daulaire said, quoting former Secretary of State Hillary Clinton as saying that, at a time when doubts have been raised about U.S. motives and actions abroad, work in global health reminds the world what America stands for.

“It contributes to stability and security, both because healthy populations are more stable and because we need to know what’s going on around the world to know what possible health threats, both natural and manmade, might threaten our country,” Daulaire said. “Action in this arena has emerged as our nation’s greatest tool of so-called soft power. It represents the very best of what we bring out to the world, sharing what we have and creating sound partnerships with a wide range of diverse actors.”