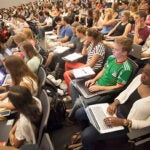 Former President Bill Clinton, Centennial Medalist at the Harvard School of Public Health (HSPH), hailed global networks that have risen to improve health around the world, saying the cooperation they foster has led to gains unmatched in other areas of need.

There’s no going back on interdependence, Clinton said; the question is whether we will have a future driven by people cooperating for the greater good, or darkened by the kind of terror seen in the Nairobi mall attack, whose dozens of victims included Elif Yavuz, a 33-year-old Harvard School of Public Health alumnae and mother-to-be who worked for the Clinton Foundation.

“The only question is what kind of future we want to share,” Clinton said.

Clinton made his comments Thursday after accepting one of three Centennial Medals from HSPH. The other winners were World Bank President Jim Yong Kim, a Harvard M.D.-Ph.D. and co-founder of the nonprofit Partners In Health, and Gro Harlem Brundtland, a former Norwegian prime minister and former director general of the World Health Organization, who received a master’s degree in public health from HSPH in 1965.

The Centennial Medals, which recognized “creative minds, effective leadership, and enormous global impact,” were a one-time award commemorating HSPH’s founding in 1913 as the Harvard-MIT School for Health Officers.

Each winner, said Dean Julio Frenk of HSPH, has demonstrated a longtime commitment to improvements in health, sometimes in the face of considerable obstacles. Along the way each has improved the lives of millions.

The ceremony also included the inaugural Harvard School of Public Health Next Generation Award, established to recognize individuals under 40 for their work in public health. The honor went to Chelsea Clinton, who serves as vice chair of the Clinton Foundation and who has worked on child health and obesity.

“We see these recipients as role models who have demonstrated what can happen when an individual refuses to be satisfied with the status quo,” said Frenk.

The hourlong event, held at the Joseph Martin Conference Center on Harvard’s Longwood Campus, was part of a yearlong commemoration of the School’s founding. Events set for Friday include a panel of health ministers talking about leadership in the field and a School-community centennial celebration.

In her remarks, Brundtland connected global health to a range of other issues, including human rights, education, and environmental concerns. She called Clinton her “favorite American president,” and praised Kim’s appointment to head the World Bank — a move supported by both Bill and Hillary Clinton — because, she said, it put someone in charge who understands health from the bottom up.

Kim spoke to the HSPH students in the audience, urging them to take advantage of their opportunities. And, though he acknowledged the practical wisdom of attempting to tackle narrow, manageable problems, he also urged them to take on an impossible challenge at least once in their careers. When Kim undertook a similar effort, together with Paul Farmer, Kolokotrones University Professor and chair of the Department of Global Health and Social Medicine, they founded Partners In Health, learning to approach big problems with a creativity born “out of sheer panic,” he said.