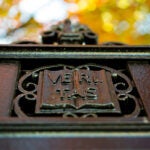 Retiring professor reflects on his half century at the Law School, and his robust public life

After five decades as one of the most visible and vocal presences at Harvard Law School (HLS), Alan M. Dershowitz is in his final semester of teaching and will relinquish his chair at the end of the academic year. Once an enfant terrible, he is reflective as he becomes an éminence grise.

“I don’t think of myself as retiring. I think of myself, for the first time, as changing my career,” said Dershowitz, the Felix Frankfurter Professor of Law, in a recent interview from his office atop Hauser Hall. “This is the only job I ever had. I came here at 25, and I’m leaving here at 75.”

Dershowitz joined the HLS faculty in 1964 after graduating first in his class at Yale Law School and clerking at the U.S. Supreme Court and U.S. Court of Appeals. Best known to the public for his work in criminal and constitutional law, he remains among the youngest professors to receive tenure at the University, at age 28.

The Law School will host a tribute to Dershowitz on Monday, featuring an array of friends and colleagues, including Dorit Beinisch and Aharon Barak, both former chief justices of Israel’s Supreme Court, and Charles Ogletree, the Jesse Climenko Professor of Law at HLS.

Looking back on his long career, Dershowitz expects he will leave his mark in two ways.

“I’ve written important articles on prevention, on the concept of the preventive state, how the law is moving much more in an area of trying to prevent wrongs than trying to deal with them after they occur. That will be my academic/intellectual legacy,” he said. “But I think my other legacy has been to teach students never to accept answers, always to challenge authority, not to accept the status quo, to be intellectually rigorous.”

Over the years, Dershowitz’s role as teacher and scholar has often been eclipsed in the public mind by his larger-than-life persona as a provocative cable TV pundit and best-selling author, as well as a criminal defense attorney associated with some sensational trials, including those of O.J. Simpson, Claus Von Bulow, and the Chicago Seven. It’s a public profile that brought him the kind of mainstream celebrity and financial success that few scholars enjoy.

“I never had a strategy about my life,” said a thoughtful Dershowitz. “I didn’t have enough information to have a strategy. I’m the first person in my family to go to college. I had no family mentors.

“One day The New York Times called and said: ‘Would you like to write a book review?’ Sure! I don’t know why they called me. Then, once I was in The New York Times, ‘Larry King’ would call me and ‘The Today Show’ would call me. So my name became associated with public explanations of the law, but it was a complete accident. My whole life has been a complete accident.”

He added later, “It’s been a good ride for 50 years. I’ve loved every minute of it.”

Though Dershowitz is known as a tough legal fighter, what his friends see and value most are his underlying motivations.

Dershowitz has long been an “eloquent” and “devoted” ally to the causes of Israel and human rights, said author and Nobel laureate Elie Wiesel.

“Alan Dershowitz and I have been friends for many decades, and he has participated in so many events helping victims — victims of hatred, of fanaticism — and always on the side of Israel, trying to help the Jewish state, always fighting those who cannot stand anything decent in human relations,” said Wiesel in a phone interview. “Whenever I needed an ally, or he needed an ally, we were there for one another.

“He should not retire. But if he does, I’m sure he will do with his life as much, if not more perhaps, for the same causes that both of us” champion, Wiesel said.

HLS Dean Martha Minow called Dershowitz “a dynamic and dazzling teacher in the classroom, a breathtakingly prolific and provocative scholar, and a public intellectual on a truly global scale.”

“As he prepares to shift from full-time teaching (he could not be retiring!), I hope he can pause long enough to see his immeasurable impact not only on the world but on generations of our students, as so many say without hesitation that he was the most memorable teacher and mentor they ever had,” Minow said in an email.

Martin Weinberg, J.D. ’71, now a noted Boston defense attorney, studied under Dershowitz and later worked as co-counsel on several high-profile cases. He credits Dershowitz as an important mentor to many criminal defense lawyers and for demonstrating another career path to HLS students.

“Back 45 years ago, there were very few students who were driven toward criminal law,” Weinberg said in a phone interview. “The school had so many graduates who went to Wall Street and went into clerkships, and Alan was just a blazing example of somebody who could make criminal law and constitutional law part of their lives.”

Never one to shy away from discussing his consultations with world leaders, Dershowitz pointed proudly to a photograph in his latest memoir, “Taking the Stand: My Life in the Law,” due out Oct. 15. He and President Obama, an HLS graduate, are shown sitting with national security staffers as Obama has a good laugh at Dershowitz’s expense.

“He said to me, ‘How’s your autobiography coming?’ And I said, ‘It’s very hard writing an autobiography. How do you balance humility with pride in your accomplishments?’” Dershowitz explained. “And he looked at me and said, ‘Alan Dershowitz? Humility?’ ”

His unyielding stances on constitutional and civil liberties and the Arab-Israeli conflict, and his withering critiques of prominent intellectuals such as MIT linguist Noam Chomsky, with whom he’s been sparring for four decades, have served as clear borderlines between opposing factions.

“I could write a 500-page book of just my hate mail,” said Dershowitz with a touch of pride as he admired critical letters taped to the wall of the office suite that he shares with Ogletree. “I’m a very tough guy, and I fight hard, and I don’t give up. And that makes me friends and that makes me enemies, and I know that.”

When asked about their disputes, Chomsky replied in an email: “I actually have paid very little attention to him, apart from occasionally — very rarely — responding to the flood of slanders, fabrications, and apologetics for crimes that he pours out regularly.”

“You know, I like Noam Chomsky personally,” said Dershowitz. “He was counselor of mine at camp when I was 10, at a Jewish Zionist camp in New York called Camp Massad.

“Our feuds have all been about Holocaust denial, Israel, and America. I regard him as far too radical in his criticism of America and far too uncritical of America’s enemies. I wish some day we could sit down and talk and resolve some of our differences in a private setting. I don’t think that’s likely to happen,” Dershowitz said.

In his memoir, Dershowitz tells of the time not long after he got tenure when Derek Bok, then dean of HLS,  mentioned that Dershowitz was costing the School a lot of money. Knowing that his salary was in line with other faculty, Dershowitz told the dean he was confused. Bok then pulled out a letter from a wealthy alumnus who had pledged to donate a building worth millions to the Law School — on the condition that Dershowitz was fired. Dershowitz said the motive for the unusual offer, which Bok never for a moment entertained, stemmed from a pro-bono client accused of making a deadly bomb, whom Dershowitz had successfully defended.

“Harvard has allowed me to be who I am,” he said. “I’ve never been called in by a dean or a president [who] said ‘I want you to do things differently.’ They’ve given me my freedom.”

Although he will go on emeritus status, Dershowitz said he won’t be disappearing from public life. He and his wife, Carolyn Cohen, a neuropsychologist, recently sold their longtime Cambridge home and will shuttle among residences in Manhattan, Martha’s Vineyard, and South Beach, Fla. He plans to return to Cambridge regularly, perhaps to teach a freshman seminar now and then, but intends to spend most of his time writing more books, consulting on a few international cases such as the WikiLeaks/Julian Assange matter, and speaking out on legal and political issues.

“I have an enormous amount of energy, and I have this horrible affliction called F.O.M.S. — fear of missing something,” he said of his perpetually busy schedule. “I don’t like to choose, so I do everything.”

As for how he will be remembered outside academia, Dershowitz said it’s difficult to predict precisely, but he anticipates the result will probably involve the Simpson case and Israel.

“I hope people will at least analyze fairly what I’ve tried to do in those two areas where I’m most well-known: representing unpopular defendants in criminal cases and helping to resolve the Israel-Palestine conflict. I don’t expect that I will be represented fairly, but I’m going to do what I can do bring that about,” he said, mentioning his plan to rebut his obituary in advance in case news outlets don’t accurately reflect his life.

In the end, Dershowitz said, he has no regrets.

“I don’t look backward. I look backward when I’m really pissed off at something or somebody, but I don’t regret. I’ve had such a satisfying life professionally and personally,” he said, later adding: “I hope my tombstone says, ‘Never boring.’ ”