A welcome mat for veterans 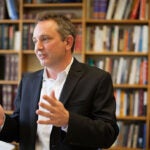 Gen. McChrystal, Faust address those with military ties at Harvard

To a room full of Harvard students with military backgrounds, Gen. Stanley McChrystal yesterday offered words of advice: Loosen up, and reach out. “Throw yourself on that side,” he said of the civilian and academic worlds where the rules may seem different and the people foreign. “This is a magic opportunity here.”

The retired four-star general, now a senior fellow at Yale’s Jackson Institute for Global Affairs, was among those welcoming to Harvard new and continuing students with military backgrounds. McChrystal, the architect of the counterinsurgency strategy in Afghanistan, was a National Security Fellow at the Harvard Kennedy School (HKS) in 1996.

“You’ve been at war for more than a decade,” he added. “You shouldn’t be at war here.”

The veterans’ welcome was organized and funded by the Office of the President, the Belfer Center, and the Center for Public Leadership at HKS. Listeners crowded into the main dining room at the Faculty Club.

The three-year-old tradition included a welcome from President Drew Faust, a historian of the Civil War and the daughter of a decorated World War II veteran. “Harvard has long had a special commitment to the American military,” she said. Faust pointed across Quincy Street to Loeb House, the longtime residence of Harvard presidents that was taken over by the U.S. Navy for its V-12 officer training program during World War II. (“The Navy treated it as a ship,” she said, including scrubbed “decks” and “polished brightwork,” or exposed metal surfaces.) Seventeen of Harvard’s graduates have been awarded the Congressional Medal of Honor. Only the Army and Navy academies record higher totals.

One hundred and fifty current or former members of the military are enrolled at Harvard, said Faust, most of them studying business, government, and law. (There are three undergraduate veterans.) The small numbers reflect that just 1 percent of Americans serve in the military, so “it’s especially important for Harvard to connect,” she said. “The military offers special lessons in leadership, and commitment to something larger than oneself.”

Event organizer Meghan O’Sullivan also discussed public service in her introduction, saying that veterans add a unique dimension to the concept. “We expect you’ll play a special role at Harvard,” said O’Sullivan, the Kirkpatrick Professor of the Practice of International Affairs at HKS and the deputy national security adviser for Iraq and Afghanistan from 2004 to 2007

McChrystal later added a variation on that theme, proposing that civilians be given a one-year opportunity to perform federal service in teaching, conservation, health, and other areas. He came to the Boston area this week in part as an advocate for the Franklin Project, a venture by the Aspen Institute to establish a voluntary civilian counterpart to military service.

The generation that came through the cauldron of World War II, including 16 million Americans in uniform, emerged from that conflict “to raise their idea of citizenship beyond war,” he said. Yet today there is “no shared vision” of citizenship and contribution.

But there are signs of change, said McChrystal, including at Harvard, where in the beginning of Faust’s presidency 9 percent of graduating seniors applied to Teach for America; that figure is 20 percent today.

Time magazine columnist Joe Klein, a fellow at Harvard’s Joan Shorenstein Center this semester, stood up from the audience to tell the gathered veterans about their next “stage” of service — redeploying the social and leadership skills they honed in wartime. “Thank you for your service,” he said, “but we still need you.” (Klein is using his semester to write a book about media coverage of veterans.)

During an hourlong panel of speakers, the veterans got more insight and advice. “Everybody has a different Harvard,” and the rules might seem loose to military minds, said Harry R. Lewis, Gordon McKay Professor of Computer Science and formerly dean of Harvard College, whose era goes so far back that he has one of the University’s first six email addresses. The best way to get mileage out of the experience is to “build relationships,” he said, echoing McChrystal. “Make Harvard your own.”

Linda J. Bilmes, the Daniel Patrick Moynihan Senior Lecturer at HKS and a leading researcher on the financial tolls of war, used her time to offer research work to veterans, and to define the size of the problem facing the United States. There are 22 million veterans in the country, including a rising percentage of women, she said, but there is little research into costs that accrue around them. Just for current wars, those costs exceed $1 trillion — with no budgetary provisions built in to fund them.

“This is a different world, and you are bring something special to this world,” said Bilmes. “But they will teach you a lot too.”

With three years at Harvard so far, Army Col. Everett Spain described the civilian and military interactions that sometimes play out as “crossing the street.” The Harvard Business School doctoral candidate called the military and Harvard “the two greatest honors of my life.”

Spain, a veteran of both the Iraq and Afghanistan conflicts, invited his fellows to look at Harvard as a place with a centuries-long military tradition: 1,352 graduates, faculty, and staff have died in American wars, starting with 22 in the Revolutionary War. Like Faust, Spain pointed to examples, starting with nearby Memorial Church and Harvard’s 20 monuments or other symbols of war. But modern Harvard may need to be reawakened to its military connections, he suggested. “The University is diverse,” said Spain, but generally “it only knows the military through you.”

Another panelist, Kevin Kit Parker, is a major in the Army Reserves, and a specialist in traumatic brain injury. He took his first faculty position in 2003 barely 24 hours after returning from a combat tour of Afghanistan. Parker has done two tours now, as well as two missions there in 2011 to assess combat medical care.

Everyone brings complaints and observations back from a combat zone, and that can be invaluable for academics grappling with problems, said Parker. “Your responsibility is to leave these problems here [at Harvard]. The faculty needs your battlefield experience.”

Veterans arriving in an academic setting “already know what good leadership looks like,” said Kevin W. Sharer, who has been at the University for a year. The Naval Academy graduate and former CEO of Amgen is a senior lecturer of business administration at the Harvard Business School. Arriving veterans have already been tested, and some have even “endured the unendurable.” Of his own years in the submarine service, said Sharer, “the lessons I learned … stuck with me forever.”

But the world outside the military, and the University setting itself, both contain cautions for veterans, he said, since the rules are not always as clear-cut. “The world is a wonderfully, wonderfully diverse place,” Sharer added. “Be open to that.”