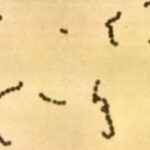 He sees “theranostic” particles that not only deliver nanotherapy, but also beam back diagnostic images of changing tumor cells. He sees “smart” nanoparticles that release tiny doses of drugs, such as insulin, in response to body conditions, like changing blood sugar levels.

Farokhzad sees nanoparticle-based vaccines that can take the joy out of smoking and reverse allergies, and the development of therapeutic nanoparticles that can be taken orally instead of injected, opening whole new classes of medications, like cholesterol-lowering statins, to nanoparticle therapy.

An associate professor of anesthesia at Harvard Medical School (HMS) and Harvard-affiliated Brigham and Women’s Hospital (BWH), Farokhzad sees these things because he’s helping bring them to reality. Of the seven targeted nanoparticle-based drug candidates currently in human trials, two are based on technologies developed in part in his lab.

“I think the medicine my own kids will see in the next 30 to 40 years will be very different from what we practice today,” said Farokhzad, the director of the Brigham’s Laboratory of Nanomedicine and Biomaterials. “Targeted therapies will be the mainstay of treatment for almost all diseases.”

Nanoparticles are molecular-scale capsules that can deliver tiny payloads, such as anti-cancer drugs, into the body. A common method uses fat molecules to create the particles, which release the drugs inside when the fat breaks down. Farokhzad, building on work by scientist Robert Langer at the Massachusetts Institute of Technology, has developed controlled-release nanoparticles made of polymers instead of fat. These better resist breakdown and so release drugs over longer periods.

If the disease doesn’t kill you …

Using a controlled-release nanoparticle in therapy has several advantages over conventional drug delivery, Farokhzad said. Particles with molecules that bind to the outside of cancer cells can target a tumor cell and release drugs directly to the malignancy. In addition, the particles’ extended survival in the bloodstream extend the tumor cells’ exposure to the anti-cancer drug, delivering a greater cumulative dose to the tumor even while lowering the toxicity to the rest of the body.

In traditional chemotherapy, for example, doctors blast a patient’s entire body with chemicals in an effort to kill tumor cells. Almost all of the drug, however — upwards of 99 percent, Farokhzad said — misses the tumor entirely. Instead, the highly toxic chemicals hit other organs and tissues, forcing physicians into a high-wire act balancing tumor-killing effectiveness and toxicity, which can lead to a range of side effects, and even kill the patient.

In addition, Farokhzad said, the traditional chemo infusion results in a short-duration pulse during which the tumor sees most of the drug. Concentrations then typically fall quickly as the body clears away the chemical.

In controlled-release therapy, the nanoparticle concentration is also highest in the blood immediately after infusion, but because the drug is released from the particles more slowly, its peak concentration — and its highest toxicity — is lower, blunting unwanted side effects.

At the tumor site, the opposite happens. The nanoparticles’ ability to lock onto tumor cells delivers between five and 10 times the dose of traditional chemotherapy at any moment. And because particles circulate in the blood longer, the tumor’s exposure is also longer.

“A tumor sees a materially increased drug concentration compared with the drug given in conventional form and the rest of the body sees about the same level of the drug,” Farokhzad said. “[But] it’s being delivered much more gently over time.”

Two potential therapies based on work in Farokhzad’s lab are in human testing. The first, BIND-014, uses targeted nanotherapy for lung and prostate tumors. The drug candidate recently passed phase 1 trials, which are focused on a drug’s safety, and entered phase 2 trials, which measure the therapy’s effectiveness. Farokhzad said the molecular target on the prostate cancer cell is also found on the cells of tumor blood vessels, giving the therapy potentially broader cancer-fighting applications.

The second therapy, which is in phase 1 trials, is a nicotine nanoparticle vaccine, meant to help smokers quit and prevent relapse for those who have done so. The vaccine works by sensitizing the immune system to nicotine, a small molecule that normally escapes the immune system on its way to the brain’s pleasure centers. The vaccine makes nicotine visible to the immune system, clearing it from the body and removing the pleasurable sensation it causes.

The trials are being run by two of the three companies Farokhzad has founded since 2007. The first, Bind Therapeutics, was established to develop the early promise of targeted nanoparticles for cancer treatment. The second, Selecta Biosciences, was similarly founded to pursue nanoparticle-based vaccine development. The third company, Blend Therapeutics, is designing drug molecules that are optimized from the start to work with nanoparticles to target infectious diseases, inflammation, pain, and cancer.

Passing the “who cares’’ test

Farokhzad, who received his M.D. from Boston University, was drawn to nanoparticle research during his residency at BWH. In addition to his clinical duties, he was conducting research on the transcription factors that regulate the expression of genes involved in myeloid differentiation, but he was looking for a project that had a near-term potential to improve the lives of patients he was seeing in the clinic every day.

“I was just stepping back … and looking at the big picture. If I did everything well and understood the transcriptional regulation of these genes, whose lives would it change? At the end of the day, does it pass the ‘who cares’ test?” Farokhzad said. “I wanted things that had a human application, a bench-side innovation that could go to the bedside.”

Farokhzad heard about Langer, who runs the largest biomedical engineering lab in the world and has conducted pioneering work in tissue engineering and drug delivery systems, including long-lasting nanoparticles.  He contacted Langer, who agreed to take him on as a postdoc.

Farokhzad explored creating nanoparticles with nucleic acids on their surface that bind to specific sites on cancer cells, like a key that fits a lock, as he described it. In 2004, he demonstrated that the technique worked on cells in a lab dish and, a year later, delivered a talk at an international cancer conference in Paris describing experiments showing that the technique worked in animals.

“I thought if there was a way to spatially control which tissues saw more of the drug, it would be a paradigm shift,” Farokhzad said.

The response was immediate. Conference organizers chose his work to be among the handful of findings they promoted out of the conference, and the media attention drew venture capitalists looking to finance the next big discovery.

Farokhzad, who had left Langer’s lab in 2004 to start his own lab at the Brigham, turned to Langer, who he knew had started several companies. Together, the two co-founded Bind Therapeutics.

“He totally took it to a huge new level,” Langer said of Farokhzad’s development of earlier nanoparticle research. “Omid is passionate about making discoveries into new products that can help people’s lives.”

Farokhzad not only took from Langer’s lab an interest in nanoparticles, he also adopted Langer’s view that private industry is an essential partner in bringing discoveries to the patient.

“My philosophy has been: ‘How do you get these things to the public?’ Our lab is a pretty good size and does pretty well in grants, but you can only go so far in what you expect students to do,” Langer said. “These companies provide a terrific vehicle for bringing these ideas from the lab to the clinic.”

Today, Farokhzad’s lab takes up one entire floor plus part of another in the Brigham’s Medical Research Building in Boston’s Longwood Medical Area. Its 30 investigators, including fellows and students, explore ways to make nanoparticles with novel properties that might make them useful in therapy. One of his longtime fellows, Jinjun Shi, has received an appointment as an assistant professor of anesthesia and is moving upstairs to open his own lab.

Nanoparticles, Farokhzad said, can be engineered to do more than just target specific cells. They can be used flexibly to answer any number of therapeutic challenges, eliminating the need to find compounds that by themselves are both effective therapies and effective delivery systems within the body.

One recent thrust has been to develop a nanoparticle without using organic solvents because the solvents react with some types of therapeutic drugs, breaking them down before they can enter the bloodstream. Another effort, in collaboration with Langer and Richard Blumberg, a professor of medicine at HMS and the Brigham, has been to develop a particle that can be taken orally. The process mimics the natural process through which infants gain the antibodies that give them their initial protection on entering the world. The babies absorb the antibodies in their mother’s breast milk, and the antibodies cross the gut/blood barrier to give them immune protection. When nanoparticles are attached to antibodies, they can hitch a ride into the bloodstream through a barrier they couldn’t cross alone.

“If oral delivery of biologics is so difficult, why do babies do it so effectively?” Farokhzad asked.