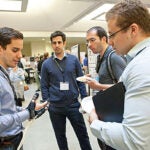 Fifty years ago, when physicists Peter Higgs and Francois Englert first suggested that the existence of a particle called the Higgs boson could explain how particles have mass, the idea was purely theoretical. No evidence of such a particle existed.

Over the next five decades, researchers around the world, including many at Harvard, worked to prove that the elusive particle was a reality. Last year, scientists at the European Organization for Nuclear Research (CERN) announced that they had detected the particle, proving that Higgs and Englert’s theoretical prediction had been correct.

In recognition of that, Higgs and Englert on Tuesday were named the recipients of the 2013 Nobel Prize in physics.

Following the announcement, Harvard faculty who participated in the Higgs hunt said they were honored to have had the chance to contribute to what Joao Guimaraes da Costa, associate professor of physics, called “the discovery of the century.”

“Finding the Higgs was a very major discovery, so I think everyone was expecting it to some degree,” Guimaraes da Costa said. “For particle physicists, it represents a new era. Of course, there are still questions to answer, but this was really a huge milestone.”

John Huth, the Donner Professor of Science and co-director of the science program, became involved in the search for the Higgs more than a decade ago. At 38 Oxford St. in Cambridge, he led efforts to construct detectors to find muons, the heavy cousins of electrons that are an important signature in the production and decay of the Higgs.

While attending a meeting to review data from ATLAS, the particle detector built in part on Harvard’s campus, Huth and colleagues watched the Nobel announcement.

“Perhaps needless to say, there was spontaneous applause,” he said. “We were particularly pleased to see that both the ATLAS and CMS [Compact Muon Solenoid] experiments were mentioned in the Nobel citation. I think many experimental particle physicists of my generation feel a strong sense of accomplishment in what is the work of a professional lifetime. Although we know what we’ve done and it’s significant, it is still particularly gratifying to see the recognition of it in a Nobel Prize.”

Already, though, Huth said researchers are looking forward and posing new questions that they hope ATLAS will help them to answer.

“Humans are peripatetic creatures, however, and even though we’ve arrived at one destination, we’re already eyeing the journey,” he said. “There are important questions out there:  What is dark matter in the universe? What is dark energy? Is there a connection between the kind of mass that Higgs confers (inertial mass) and the kind of mass associated with gravity (gravitational mass)? At this point, experiment is our best hope to answer these questions.”

Third-year doctoral student Tomo Lazovich, who has worked with Harvard’s ATLAS group — including with Guimaraes da Costa — since he was an undergrad, said that being part of the Higgs search has been incredibly exciting.

“As with any scientific discovery, the discovery of the Higgs boson both answered questions and posed new ones,” he said. “It was incredibly important because it closed one of the nagging loose ends of the Standard Model [the theory that governs subatomic particles and their interactions]. The Higgs mechanism had long been considered the leading theory for why certain particles in the Standard Model have mass. But its prediction of a new particle, the Higgs boson, had not been verified until the discovery by ATLAS and CMS.

“Being part of a discovery like the Higgs is a grad student’s dream,” he added. “I feel incredibly lucky to have participated in it. Many of us worked unbelievably hard [and slept very little] in the months prior to the announcement of the discovery. Seeing all of that hard work culminate in the discovery of the Higgs was an amazing reward.”