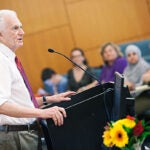 Politics does indeed make strange bedfellows. With Twitter having transformed the way the news media cover presidential elections, politicians and journalists are now agreeing on one thing: That is a huge problem.

But the “shallow nature of today’s political journalism,” fed in large part by Twitter, has led to “a journalistic reward structure in Washington that often prizes speed and scoops over context,” Hamby said in a research paper written while he was a fellow at the Joan Shorenstein Center on the Press, Politics and Public Policy last spring.

Hamby studied Twitter’s role in reshaping how the media covered the 2012 presidential campaign, and how wary political strategists reacted by fencing candidates off from most reporters, particularly those in the once-prestigious traveling press corps.

“Any perceived gaffe or stumble can become a full-blown narrative in a matter of hours, if not minutes, thanks to the velocity of the Twitter conversation that now informs national reporters, editors, and television producers,” Hamby said in a phone interview.

Although only a tiny fraction of voters are on Twitter, most of the news stories written about candidates incubate in conversations that begin as tweets. “Its ability to shape conventional wisdom this cycle was remarkable,” said Hamby. “It was the first thing we all looked at as reporters every morning and before bed. It’s the first thing the Obama and Romney campaigns did, where they went to spar and engage.”

For his research paper “Did Twitter Kill the Boys on the Bus?” published this month, Hamby interviewed more than 70 top journalists and political operatives in Mitt Romney’s 2012 presidential campaign, as well as others who worked on prior elections for both political parties.

The paper’s title refers to Timothy Crouse’s groundbreaking 1973 book, “The Boys on the Bus,” about life on the campaign road with the randy band of now-famous journalists, including Hunter S. Thompson, Jack Germond, and R.W. “Johnny” Apple, who covered the 1972 presidential campaign of Richard Nixon and George McGovern.

Hamby said his desire to study Twitter’s role in manipulating coverage of Washington politics was prompted by own experiences on the campaign trail, where he said the pace and the kinds of news stories being told in the Twitter era differed radically from the 2008 election cycle.

“It just felt so frenzied and small at times, and I wanted to take a break and reflect on how we covered the 2012 campaign — talk to the people I got to know during the campaign, both inside the Obama and Romney camps, but also my fellow reporters and just talk to them about how it all felt. What can we do better?”

Hamby’s research focused on the cadre of mostly young reporters who lived in what he called “the bubble.” Armed with digital video cameras, iPhones, and notepads, the group daily followed Romney’s every move as his political road show crisscrossed the country.

Hamby said most “bubble” reporters, who are often in their early 20s with little professional experience reporting or working on a presidential campaign, made up for their lack of political savvy and sources by tweeting feverishly about the more trivial and petty aspects of the Romney campaign, such as what the candidate and his wife, Ann, ordered at a takeout burger joint, or the hassles of traveling.

Hamby said that the Romney campaign’s open disdain for his tweeting press corps was borne largely from the belief that what they wanted was not substance, but a gaffe or meme-worthy moment to blast out to followers.

“You have two guys on a stage, and one guy says, ‘I have a solution to the Middle East problem,’ and the other guy falls into the orchestra pit, who do you think is going to be on the evening news?” Fox News president Roger Ailes famously said in 1988, when he was a political operative.

It was a lesson the Romney campaign took to heart.

“Twitter has changed the back of the bus,” Matt Rhoades, Romney’s former campaign manager, told Hamby. “This environment is just not as conducive for us to go back there. It’s just people on Twitter waiting for Mitt to fall in the orchestra pit.”

Hamby said the Romney camp’s strategy of giving access only to news outlets it perceived as friendly and to a small number of big-name national reporters backfired.

“I think they just made a calculated bet that, ‘We just can’t trust these people, they’re too young, they don’t have the experience.’ And they were just going to sit back and wait for Dan Balz [of The Washington Post] and Adam Nagourney [of The New York Times] to show up on the airplane, and that just never happened,” said Hamby.

Many in the Twitter brigade were expected to serve as instant authorities on “all things Romney” for their news organizations and were pressured to unearth fresh nuggets of coverage in 140 characters or less dozens of times a day, even when little happened that was newsworthy.

“I think Twitter creates an impulse — because everyone is on it — that we have to be in the conversation too,” said Hamby. “It preys on the insecurity of reporters and editors. If someone has something, they have to go get it too.”

With a tiny club of journalism tastemakers talking about the same things to one another, the buzz from the Twitter echo chamber frequently started political brush fires that campaign operatives on both sides had to stamp out.

“If two kids with an abacus in Keokuk, Iowa, put out a release that said, ‘We just did a poll,’ and that went out on Twitter, there would be a lot of discussion in Washington and Twitter about ‘the Keokuk poll,’” David Axelrod, a senior adviser and strategist for President Obama’s 2008 and 2012 campaigns, told Hamby.

Hamby, himself a veteran of the bubble in 2008 and the Romney campaign in 2012, said he didn’t anticipate the reaction he got from many of his fellow political reporters once the campaign ended. Some say they’re reconsidering how they will use Twitter in the next election.

“I’m not going to surprise anyone or offend anyone by saying that journalists are kind of a self-important bunch. They don’t admit mistakes very often,” said Hamby. “But I was kind of surprised how many of the reporters who covered the Romney campaign regretted some of the things they wrote about, tweeted about — how they wished they’d done things a little differently.

“I regret how I’ve used Twitter,” he said. “I think everyone who’s a reporter has sent tweets they wished they hadn’t sent.”

With the proliferation of Twitter and Instagram and live streaming, the traveling press corps’ once-indispensable function — to document what a candidate said and did each day on the trail and to provide voters with a sense of the scene at events — may be coming to an end, in part because of the faltering economics of the news business, Hamby said.

“I think that stuff is important if you can afford it. But there’s an opportunity cost if you can’t afford it,” he said. “For example, The Boston Globe, which I think is really smart, just weighed the value of being in the bubble and put its reporters elsewhere. They only have five or six [Washington] reporters and not a big budget, and just decided, ‘Let someone else cover this stuff.’”

Now back in Washington, D.C., Hamby said his experience at the Shorenstein Center was challenging and intimidating, but also rewarding.

“I think, in Washington, you can get away with [faking] your way through conversations and people just agreeing with you,” said Hamby. “People at Harvard are as smart as advertised, and it was intimidating. But it really forced me to back up my arguments with reason and evidence. And that paid a lot of dividends, and I’m really grateful that I got the chance to be there.”