The little old machine that could 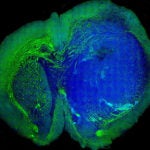 Lasering in on tumors

In gleaming new Arboretum lab, researchers still use 1931 device because it’s the best there is

On a bench in the Arnold Arboretum’s new lab building, not far from the $90,000 standard microscopes and the even pricier confocal microscope whose lasers can build 3-D computer images of tiny plant parts, sits a humble microtome: a solid metal, hand-cranked, precision-machine throwback to another scientific era.

It was manufactured by the Spencer Lens Co. of Buffalo in 1931, the same year the Empire State Building opened and gangster Al Capone was sentenced to prison for tax evasion. Though similar machines have long since landed in the junkyard or in museum collections, Arboretum director William “Ned” Friedman is in no hurry to add a replacement to his budget.

“Paraffin wax microtomes have been made for more than a century, and the old ones are virtually bombproof. … The technology is timeless, and all that is really required is a little bit of grease every so often and a good sharp knife,” said Friedman, the Arnold Professor of Organismic and Evolutionary Biology. “New microtomes of this sort might cost about $10,000, but it is unlikely they will do a better job than the microtome we have in the lab.”

Sara Schechner, the David P. Wheatland Curator of Harvard’s Collection of Historical Scientific Instruments, said that some older laboratory instruments survive here and there across campus, but it is unusual to find one in a newly equipped lab.

“Old workhorse instruments do continue in use in some labs or become dedicated to teaching purposes because they’re so dependable and reliable,” Schechner said. “I suspect it is uncommon in modern, brand-new labs and buildings, where things are fitted out with state-of-the-art apparatus.”

A recent example cited by Schechner was the Harvard Cyclotron Laboratory, dismantled in 2002, whose control console still used vacuum tube equipment dating from 1947. A portion of the console is on display in the Collection of Historical Scientific Instruments’ Putnam Gallery in Harvard’s Science Center.

Part of the microtome’s strength may lie in its simple function. It is essentially a tissue slicer, lopping off extremely thin slices of plant or animal material so they can be viewed under a microscope.

Surrounded by gleaming glassware and expensive equipment purchased when the Weld Hill Research Building opened in 2011, the dull black microtome is still used regularly by faculty, fellows, and students. Researchers first embed specimens in paraffin wax to provide support for the slicing operation, then place the prepared specimen into the machine and turn the hand crank. Inside, the gears advance the specimen and draw it down across a razor-sharp blade, slicing off 10-micrometer-thick segments that can be viewed on a light microscope.

“In my lab, we section plant material from flowers and developing fruits to look at the fertilization and seed development process,” Friedman said. “When the sections are placed on a microscope slide, they are stained with one or more of a very large number of possible dyes that can elucidate specific chemicals and biological structures of the plant. When viewed through one of the state-of-the-art microscopes at Weld Hill, the patterns revealed are as aesthetically magnificent as those seen through the telescopes of astronomers.”

The machine has outlasted not only the generation of scientists who unpacked it new, but also its parent company, which was purchased and purchased again until it became part of Leica PLC and then was spun out with Leica’s other microscope holdings into Leica Microsystems. The device has outlived Arboretum trees devastated in the hurricane of 1938, seen the founding of the bonsai garden in 1937, and the establishment of the rose collection in 1985.  It slices on today as the hemlock woolly adelgid challenges the Arboretum’s Hemlock Hill and as horticulturalists remain vigilant against a possible invasion by Asian longhorned beetles.

“These old paraffin microtomes would have been found in universities across the country. … I suspect that many of them have been thrown away, even though they have current utility,” Friedman said. “There really is something wonderful about knowing that the piece of equipment was so well-made that it could last a century. Nostalgia does play a role, but at the end of the day, it works as well as anything new.”