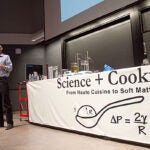 This is the fifth in a series of stories about Harvard’s engagement in Latin America.

“We don’t send anyone through here without a personal guide,” joked Matt Holman as he led a visitor through a maze of corridors and crossways at the Harvard-Smithsonian Center for Astrophysics (CfA) in Cambridge.

But a personal guide of sorts is exactly what a group of astronomers, with help from Holman, a lecturer on astrophysics at Harvard, and his collaborators at the Southwest Research Institute (SwRI) in Colorado will be happy to have in two years while piggybacking on a National Aeronautics and Space Administration (NASA) spaceship that is racing to the farthest edges of the solar system.

Scientists tend not to joke when it comes to navigating their celestial territory, and that includes Holman and Alex Parker, a former postdoctoral fellow at the CfA’s Institute for Theory and Computation, who are part of a mission to find an object in the far-flung Kuiper Belt. They’ll work on that with the help of SwRI’s Marc Buie and a number of massive telescopes, including two large Magellan telescopes at the Las Campanas Observatory in Chile.

“The Kuiper Belt objects are the building blocks of planets,” explained Holman, senior astrophysicist with the Smithsonian Astrophysical Observatory and associate director of the CfA’s Theoretical Astrophysics Division, who specializes in the study of extrasolar planetary systems. “They are relatively primordial, and this may be our only opportunity for us to see one of these objects up close.”

To do that, Holman’s team is hitching a ride on NASA’s New Horizons spacecraft, which will blaze past Pluto on its exploratory mission of the dwarf planet sometime in 2015 at more than 30,000 miles per hour. After completion of the Pluto mission, Holman’s SwRI partners, including New Horizon’s principal investigator, Alan Stern, will give NASA the green light to fire the ship’s rockets. They will redirect the craft by roughly one degree, and blast into unexplored territory past an object in the distant Kuiper Belt, a vast region composed of icy fragments, leftovers from the solar system’s creation 4.5 billion years ago.

These fragments could reveal much about the makeup of the universe, but finding one is no easy task. Before the NASA craft makes its pass by Pluto, the research team has to pinpoint where to direct the vehicle.

“Magellan comes into play because it has superb image quality,” said Holman, referring to the twin 6.5-meter telescopes located 200 feet apart on a remote mountaintop in Chile’s southern Atacama Desert. The telescopes, christened Baade and Clay after astronomers Walter Baade and Landon Clay, a Harvard graduate and philanthropist, are part of the Magellan Project, a collaboration among Harvard University, the Carnegie Institution for Science, the University of Arizona, the University of Michigan, and the Massachusetts Institute of Technology. Magellan’s sophisticated design includes main mirrors consisting of 21,000 pounds of borosilicate glass supported by a lightweight honeycomb structure.

One of the massive telescopes is equipped with what sounds like a superhero gadget: Megacam, a giant digital camera whose construction was led by CfA astrophysicist Brian McLeod. Mounted on the back of the Clay telescope, it’s armed with a 24-foot-by-24-foot field of view and offers researchers 36 times as many pixels as a high-end consumer digital camera.

“It doesn’t matter that you can take a picture that’s extremely sharp if you don’t have a camera that has enough pixels to record that image quality,” said Holman. “Megacam really makes that possible.”

Parker has developed a means of subtracting stellar light from the pictures captured by Megacam, which in turn allows researchers to home in on the faint moving objects and track their exact locations. Over the past couple of years, he has been busy trying to identify Kuiper Belt objects.

“Once you’ve measured an object’s location over a period of time, you can measure its orbit around the sun. And that’s what we need,” said Parker, who this month became a planetary scientist at the University of California, Berkeley, but will continue to work on the Kuiper Belt project. “We need to know its orbit around the sun so we can predict where it will be in the future and whether or not our spacecraft will fly to it.”

Like Magellan’s finely tuned instruments, the telescopes’ location will also factor in the team’s success. The site’s mountaintop setting, perched on the edge of the ocean, far removed from a major metropolis, sets up an astronomer’s dream: “good seeing.”

Researchers are limited to searching only a fraction of the sky that will be close to the craft’s altered trajectory. In addition, the objects they are looking for are fainter and “necessarily smaller because there aren’t that many big ones” in the Kuiper Belt, said Holman. Complicating their efforts is the fact that Pluto is currently emerging from its proximity to the Milky Way, whose billions of glowing stars make tiny, faint moving objects in the nearby Kuiper Belt even harder to see.

While beautiful to most, twinkling stars are “bad news” for the researchers, said Holman. “It means [the light] is dancing around in the atmosphere. That twinkling means how much light you are getting is changing and its position is changing, and that means that if you take a picture, it’s going to be more blurred. At Las Campanas … image quality can be fantastic, the seeing can be wonderful, and that’s really helpful when you want to look for fainter objects.”

Thus far, Holman and his colleagues have identified a handful of faint objects in the Kuiper Belt that might be in the right patch of sky when New Horizons passes by Pluto in 2015. In the coming months, they will analyze their data “to refine our understanding of their orbits to be sure that they are good candidates,” said Holman.

“We are hoping the data we collect in the next month or so,” he added, “will really turn up what we are looking for.”