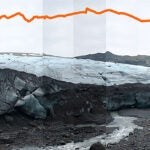 ‘Chasing Ice,’ and searching for solutions

Half a dozen undergraduates took short, hesitant steps as they headed onto a small section of the Pforzheimer House roof. Li Murphy was the exception. The energetic junior moved directly toward a small, colorful hive brimming with bees, and quickly launched into an impromptu tutorial.

As the minutes ticked by, several students inched closer to the hive, and a few even volunteered to help Murphy pull out a frame that was “dripping in goodness” (also known as honey). One of those volunteers, first-year student Amalee Beattie, left the roof feeling exhilarated by the opportunity to learn something new.

That was the experience Murphy had hoped to create when she co-founded Harvard Undergraduate Beekeepers a year ago with fellow student, and now alumnus, John Aloian ’13. The two organismic and evolutionary biology concentrators wanted to create a social forum to engage their peers in the life cycle of honeybees. The organizers also wanted to educate students about the critical role bees play in biodiversity.

With support from the Harvard Center for the Environment and the Office for Sustainability, Murphy and Aloian began with “bee-ducation,” hosting movie screenings and small group discussions. After an intensive beekeeping training seminar, they installed their first hive in May.

“Bees pose so many interesting questions to neurologists, evolutionary biologists, plant biologists,” said Murphy. “We wanted to build on Harvard’s incredible tradition of hands-on, experimental biology by curating our very own beehive on campus.”

Novice urban beekeeping is gaining traction nationwide, notably in nearby Somerville, where a new agriculture ordinance allows for limited beekeeping on residential properties. At Harvard, faculty, students, and staff are not only researching honeybees and the causes of colony collapse that threaten the bees’ existence and agricultural production, they are also putting their academic interests into practice on campus. From rooftops to laboratories, an informal network of hives and beekeepers has emerged that is connecting people with a shared passion for bees.

The students on the Pforzheimer roof were drawn by their academic interest in biology and their love of honey. Senior Georgia Shelton wanted to expand on her research documenting the bees of Harvard’s Arnold Arboretum. Sophomore Alice Han was fascinated by bees’ social interactions and wanted to know more about how honey was made. And Beattie was drawn because the bee group stood out as offbeat among the many on campus.

One Harvard beekeeper who is hardly a novice is Cali Pfaff, a third-year landscape architecture student at the Graduate School of Design (GSD) whose family raises bees to support their winery. On a sunny fall afternoon, Pfaff wound her way under and over enormous ventilation pipes on the roof of Gund Hall. After traversing the maze, she reached a quiet corner that has a small beehive. The hive was installed two years ago by the GSD Bees group and its founders, Hallie Chen ’12 and Connie Migliazzo ’13.

In a blog post, Chen and Migliazzo said they created GSD Bees to contribute to a “network of bees that would serve to pollinate the Harvard Community Garden, as well as the numerous surrounding community gardens in Cambridge, while also serving as a symbol of the importance of bees to the sustainability of our larger food system.” After installing the hive, they partnered with the GSD Green Design student group to design and build a structure to protect the bees during winter. This year Pfaff hopes to install raised beds near the hive to observe how bees interact with the plants she and her peers grow.

Pfaff, who is drawn to bees because they are “fascinating creatures engaged in a selfless enterprise,” believes small beehives hold great promise for the urban environment, not only in building a community of individuals committed to protecting bees but also because bees are highly adaptable and can fit into an urban ecology where nothing (soil or plants, for instance) is local anymore.

“Bees are highly interdisciplinary,” Pfaff said. “My work with bees has allowed me to be in touch with more people throughout the University than anything else.”

Murphy and Pfaff joined many of Harvard’s novice beekeepers on Sept. 10 for Bee Day, a series of events hosted by the Harvard Museum of Natural History and the Food Literacy Project to highlight the importance of honeybees and beekeeping to biodiversity, the food supply, and human health. The day included tours of the student group hives and ended with a showing of “More Than Honey,” followed by a discussion with Alex Lu, associate professor of environmental exposure biology at the Harvard School of Public Health (HSPH). In a study published last year, Lu tied pesticide use to bee colony collapse.

In addition to Lu’s work, researchers at the School of Engineering and Applied Sciences (SEAS) and the Wyss Institute for Biologically Inspired Engineering at Harvard are using lessons from bee behavior to enhance prototypes of tiny robotic insects they developed called RoboBees. And in research that could help improve future beehive design, Ph.D. student Jake Peters is working out of Harvard’s Concord Field Station to study the circulatory systems that bees use through collective behavior to regulate temperatures and carbon dioxide levels in their hives. In this natural process, bees fan their wings in a motion different than flying, seek existing airflows to amplify, and then snap into alignment with each other to create an airflow that ventilates their hives.

Watch as bees use the fanning technique.

Peters has found that changing the geometry and location of a hive’s entrance can have profound influence on the size and location of the inlets and outlets that bees create for airflow. He is now partnering with Nick Gravish, a post-doctoral fellow with the RoboBees project, to expand on his research by using the tiny robots to test out the variety of fanning behavior.

“Because hives are vulnerable to overheating in the summer and becoming too cool and CO2-enriched in the winter, we may be able to design a better hive by doing more to facilitate the natural collective behavior bees use to ventilate their hives. Efficiency is everything,” said Peters.

Peters and many researchers and beekeepers rely on the experience and knowledge of veteran beekeepers for their work. Some are Harvard employees. Lisa Boes, the Allston Burr Resident Dean of Pforzheimer House, has kept bees since she signed up for a class six years ago. She now lends her wisdom to the undergraduate beekeepers and twice a year hosts honey tastings where student residents share honey from their hometowns and their travels around the world. The event also serves to highlight study-abroad opportunities.

Bodo Stern, the director of research affairs at the Center for Systems Biology, has been beekeeping for seven years. That began when a friend moved to Canada and left Stern his hive. For the past three years he has kept a hive by his office, harvesting honey for family and friends and serving as a mentor to students seeking to learn more about beekeeping.

Beekeeping is deeply ingrained in Harvard’s history. Onetime Radcliffe College President Mary Bunting was an avid beekeeper during her time at Harvard in the 1960s. A photo of Bunting from the Harvard Archives shows her tending one of the hives she kept during her presidency. Cornell University Professor Thomas Seeley, a nationally recognized expert on swarm intelligence, kept six hives on campus while earning his Ph.D. from Harvard in the 1970s.

One of the most compelling features of honeybees is their collective behavior — the way they selflessly work together to build and provide for their colony. On Harvard’s campus, life is imitating nature in that regard. From the veteran beekeeper sharing her knowledge with students, to the entomology graduate student partnering with engineers to test his research, an eclectic group of faculty, students, and staff is coming together, united by their passion for bees and their enthusiasm for hands-on learning.

To learn more about bee behavior, Murphy likes to say it’s time to “get out on the roof and get with your bees.”