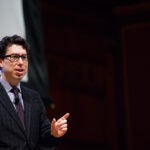 For people living paycheck to paycheck, daily life sometimes runs from one worry to the next: Can I afford to put food on the table? Will I make rent this month? What will happen if I lose my job? What if my kids get sick, or my car breaks down?

For many, those questions become so persistent it’s hard to concentrate on anything else. And that’s exactly the problem, noted Harvard economist Sendhil Mullainathan.

The accumulation of money woes and day-to-day anxiety leaves many low-income individuals not only struggling financially, but cognitively, Mullainathan said. In a study featured Aug. 29 in Science, he reports that the “cognitive deficit” caused by poverty translates into as many as 10 IQ points.

“Our results suggest that when you’re poor, money is not the only thing in short supply; cognitive capacity is also stretched thin,” Mullainathan explained. “That’s not to say that poor people are less intelligent than others. What we show is that the same person experiencing poverty suffers a cognitive deficit as opposed to when they’re not experiencing poverty. It’s also wrong to suggest that someone’s cognitive capacity has gotten smaller because they’re poor. In fact, what happens is that your effective capacity gets smaller: Because you have all these other things on your mind, you have less mind to give to everything else.

“Imagine you’re sitting in front of a computer, and it’s just incredibly slow,” he continued. “But then you realize that it’s working in the background to play a huge video that’s downloading. It’s not that the computer is slow, it’s that it’s doing something else, so it seems slow to you. I think that’s the heart of what we’re trying to say.”

To understand the cognitive load that comes with financial constraints, Mullainathan and colleagues conducted studies of two dramatically different groups — shoppers at a New Jersey mall and sugar cane farmers in rural India.

In the mall study, researchers gathered dozens of low- and middle-income shoppers and tested them on IQ and impulse control. Half of those who took part in the study, however, were first prompted with a “teaser” question — what would they do if their car broke down, and the repair cost $1,500 — designed to get them thinking about their own financial concerns.

“For the poor, because these monetary concerns are just below the surface, the question brings them to the top,” Mullainathan said. “The result was, for that group, the gap between the rich and the poor goes up, in both IQ and impulse control. There was no gap in the other group, but ask them anything that makes them think about money and you see this result.”

The farmers included in the research are typically paid only once a year, providing an even starker example of how financial worries can weigh on people’s minds.

“The effect here is about two-thirds of the size of the effect found in the mall study — it’s at least nine or 10 IQ points, just between these months,” Mullainathan added. “Between these two studies, you both see the mechanism at work, and you see that, in the real world, these effects are enormous.”

In some ways, Mullainathan said, the findings turn much of social science on its head. Rather than explaining disparities between low- and high-income people as a result of environment, or behavior, “we’re saying it’s none of that — it’s that the poor get their bandwidth taxed.”

The research, Mullainathan said, could have wide implications for policymakers, and he suggests that the solution to the problems associated with poverty isn’t merely more money, but targeting the specific concerns that increase cognitive load.

“This is very clearly saying that the moments of acute poverty, those are the moments when people’s bandwidth is taxed,” he said. “If you isolate those periods and address the issues that are causing that cognitive load, you can really get a big bang for your buck.”

As an example, Mullainathan cited an issue that’s widely recognized as one of the largest obstacles facing working parents: the cost and availability of child care.

“One of the major challenges for low-income individuals in the U.S. is having to juggle and find child care,” he said. “That’s a big cognitive load. Seamlessly solving the child-care problem would not just allow people to go to work, it would actually increase their IQ. Rather than simply looking at these challenges as a lack of money very broadly, if we could break it up and simply target the biggest concerns and deal with them, we might begin to solve other problems as well.”

It was announced on Sept. 4 that Sendhil Mullainathan was elected to serve on the MacArthur Foundation Board of Directors.