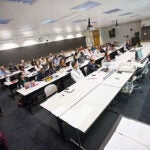 People who are married when diagnosed with cancer live longer than those who are not, report researchers at Harvard-affiliated Dana-Farber Cancer Institute and Brigham and Women’s Hospital. Married patients also tended to have cancers diagnosed at an earlier stage — when it is often more successfully treated — and to receive more appropriate treatment.

The study’s findings will be published online today by the Journal of Clinical Oncology.

“Our data suggests that marriage can have a significant health impact for patients with cancer, and this was consistent among every cancer that we reviewed,” said Ayal Aizer, chief resident of the Harvard Radiation Oncology Program and the paper’s first author. “We suspect that social support from spouses is what’s driving the striking improvement in survival. Spouses often accompany patients on their visits and make sure they understand the recommendations and complete all their treatments.”

Utilizing the National Cancer Institute’s Surveillance, Epidemiology, and End Results Program, the researchers conducted a retrospective analysis of 734,889 people who were diagnosed with cancer between 2004 and 2008. They focused on the 10 leading causes of cancer deaths in the United States: lung, colorectal, breast, pancreatic, prostate, liver/bile duct, non-Hodgkin lymphoma, head and neck, ovarian, and esophageal cancer. They also adjusted the data to account for a number of demographic factors, including age, sex, race, residence type, education, and median household income, which could have an effect on the health outcome.

Their analysis found that in comparison with married patients, unmarried cancer patients, including those who were widowed, were 17 percent more likely to have metastatic cancer (cancer that spread beyond its original site) and were 53 percent less likely to receive the appropriate therapy.

“We don’t just see our study as an affirmation of marriage, but rather it should send a message to anyone who has a friend or a loved one with cancer: By being there for that person and helping them navigate their appointments and make it through all their treatments, you can make a real difference to that person’s outcome,” said the study’s senior author, Paul Nguyen, a radiation oncologist at Dana-Farber and Brigham and Women’s, and an assistant professor at Harvard Medical School. “As oncologists, we need to be aware of our patients’ available social supports and encourage them to seek and accept support from friends and family during this potentially difficult time.”

The study was funded in part by a Heritage Medical Research Institute/Prostate Cancer Foundation Young Investigator Award, a JCRT Foundation Grant, Fitz’s Cancer Warriors, David and Cynthia Chapin, and a grant from an anonymous family foundation.