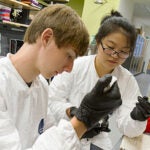 Summer in the lab

Andrea Farkas Patenaude flicked an image onto the screen at the front of the room. There, larger than life, was actress, humanitarian, director, and iconic beauty Angelina Jolie, arms crossed, in the dramatic black-and-white photo from Time Magazine’s cover in May.

“If anyone told me a year ago that the two words likely to pop into your mind when you see this picture are ‘prophylactic mastectomy,’ ” Patenaude said, “I would have fallen off my chair.”

Early this year, Jolie underwent the procedure during which healthy breasts are removed to reduce future cancer risk. Jolie later explained that she did so because of her family history and her positive test for the breast cancer gene BRCA1. Her mother died of ovarian cancer at age 56.

Though physicians have performed prophylactic mastectomies for years, there has been very little public discourse on the subject, Patenaude said. That has left high-risk women who are considering the procedure feeling alone, with few resources to help them make a difficult, but potentially life-saving, decision.

“I think Angelina Jolie did a very noble thing, and something actually very helpful to the community of women who would consider prophylactic mastectomy,” Patenaude said.

Patenaude reviewed the procedure, the disease it is meant to prevent, and the findings from a study of women who’d undergone the surgery, outlined in her 2012 book “Prophylactic Mastectomy: Insights from Women Who Chose to Reduce Their Risk.”

Breast and ovarian cancer can be so common in some families that they are considered “the family curse,” Patenaude said. She shared stories of study subjects whose mothers, grandmothers, aunts, and other family members have died of the disease.

The advent of genetic screening has given women in those families a tool to understand their own risk, Patenaude said, allowing those who carry the gene mutation to consider their options. One is intensive screening procedures to catch the disease early.

For women who don’t want such screening or the uncertainty of never knowing when a positive test might come back, prophylactic mastectomy is an option. One study showed that it reduces the chance of developing breast cancer by between 90 and 95 percent. A related operation called a prophylactic oophorectomy — removal of the ovaries — reduces the chance of ovarian cancer.

Patenaude’s study involved 21 women who underwent prophylactic mastectomy, 90 percent of whose mothers had had breast cancer, and 76 percent of whose mothers died from it. The women said they thought less about if they were going to get cancer and more about when it will strike. One main motivation in deciding to undergo the surgery was to be alive for their children and grandchildren.

After the operation, some study participants said they felt as if a dark cloud had been lifted, and that they finally felt safe in their own bodies. One said she wasn’t really fond of her breasts, since she’d always had a feeling “they were going to really kill me some day.”

Study subjects also spoke, however, of the shock of the physical transformation and the psychological impact of losing their breasts. Some said they felt “like half a woman,” and others talked about fears their husbands would lose interest in them. Reconstructive surgery after the mastectomy helps, but Patenaude said women can develop “nipple envy,” which can be addressed by procedures that save the original nipple for reconstruction purposes.

“For many of these women, they were trading physical normalcy for emotional normalcy,” Patenaude said.