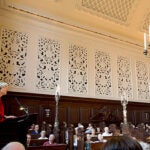 PBHA summer campers rise through ranks, give back to their communities

Dubose recalled that she had just entered her freshman year of high school when she accepted the junior counselor position at the day camp, which is part of the PBHA Summer Urban Program. “I had no idea about PBHA, and never would have thought that I could have the chance to be part of Harvard,” she said. “It changed my perspective completely.”

That transformative opportunity repeated itself as Dubose returned to the camps in successive summers, working her way from junior to senior counselor. The 12 camps, held at sites across Boston and Cambridge, are run by more than 150 high school and college students. This year, the Summer Urban Program served more than 800 area campers, ages 6 to 13.

Now a sophomore at Lesley University, Dubose served as one of the directors for PBHA’s Leaders! program this summer. The program strives to empower the almost 100 low-income Boston and Cambridge youth between 15 and 18 years old who are employed by the camps as junior counselors to serve children and young teens in their own communities.

Counselors receive full-time teaching and mentoring for the camps’ 10-week program. In addition, they receive full access to the University, including its libraries; mentoring; and leadership development during the school year — as well as paychecks.

“It’s not a job that you can just walk into,” Dubose said, but “the training they give us has definite real-life applications. In fact, during my freshman year of college, I took a class that was introducing concepts I learned and experienced through PBHA when I was 14 years old. This place can easily put you ahead of the curve.”

A junior at Boston University, Jorge Santana first learned of PBHA when he became a Mission Hill camper at age 13.

Like Dubose, Santana worked as a junior counselor throughout high school before becoming a senior counselor. For the past two years, he has been directing the Mission Hill Summer Program, which serves the lower-income community there.

In addition, as the organization’s assessment and evaluation coordinator, Santana has the distinction of being the first person elected a member of PBHA’s officer team who does not attend Harvard. The association’s history at Harvard dates back to 1904.

Before learning about PBHA’s summer camps, “I would just stay home in the summer and watch TV,” Santana said. “I didn’t gain anything from that.”

That changed with camp. While fun is encouraged through afternoon field trips in and around Boston, mornings are dedicated to stimulating intellectual challenges and academic achievement.

Each week, campers must complete two hours of math and two hours of literacy for their respective grade levels. Beyond that, junior counselors are encouraged to build curricula around the fields and subjects they are passionate about — whether that’s an introduction to the United Nations, music theory, or learning how to cook.

“PBHA’s Summer Urban Program creates opportunities for all those involved,” said Maria Dominguez Gray, executive director of PBHA. “Campers and families benefit from enriching programming and a community deeply invested in children’s academic and socio-emotional success. The teens are engaged in meaningful employment that offers needed job- and life-skills development and fosters the belief in self and one’s future so critical to positive choices moving forward.

“The college students who direct and teach in this program learn so much about themselves, about leadership, effective education, program development, and the challenges facing urban communities, learning that extends far beyond their classrooms.”

One of the successes of the program, Santana said, was its approach of viewing the city of Boston as a classroom without walls. By working closely with various organizations, exposing students to new neighborhoods and environments, the program could help to reduce tensions between neighborhoods, and the violence that can erupt as a result.

“I grew up with that tension and understood what it meant,” Santana said. “You weren’t supposed to walk through certain neighborhoods, and people from other neighborhoods weren’t supposed to walk through yours. But collaborating with various organizations throughout the city exposes kids to different areas and lowers that tension. Hopefully, that will help reduce that kind of violence as well.”

For Santana and Dubose, being involved in the summer program didn’t just provide them with experience that will help them through college and what lies beyond. It also had a profound impact on their desire to give back to their communities.

“When I run into girls whom I worked with several summers ago, they have all these memories about things I taught them,” Dubose said. “I’ll have forgotten, of course, but they remember. To know you’ve impacted the life of a young person in that way, and to see it again and again, year by year, is very powerful.”