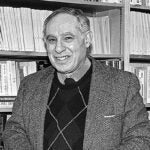 Theodore C. Bestor, the Reischauer Institute Professor of Social Anthropology and director of the Edwin O. Reischauer Institute of Japanese Studies, has received the Commissioner of Cultural Affairs Award for the Promotion of Japanese Culture from the Agency for Cultural Affairs in Japan. The Agency for Cultural Affairs is a special body of the Japanese Ministry of Education (MEXT) established in 1968 to promote Japanese arts and culture. Bestor is one of 12 distinguished figures to receive the award, which commends the efforts of individuals who endeavor to promote the study and understanding of Japanese culture.

Bestor is a specialist on contemporary Japanese society and culture, with a focus on Tokyo. He has written widely on urban culture and history, markets and economic organization, food culture, the fishing industry, and popular culture. His current research focuses on the aftermath of the March 2011 Tohoku earthquake, tsunami, and nuclear disaster, particularly their impact on Japan’s food supply and perceptions of food safety. In addition, he is continuing work on Tokyo through examination of transformations in the built and visual environment during the 20th century.