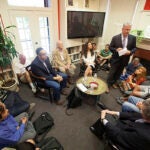 Public service was key to opening up world of opportunities

After May, when exams are finished and final papers submitted, Harvard students take to the world. But where exactly do they go and what do they do once they get there?

Here is a sample of how students from the Law School (HLS), Kennedy School (HKS), the Business School (HBS), and the School of Public Health (HSPH) used the tools they sharpened at Harvard to help build a better world.

Karima Ladhani, who is working toward a doctor of science in global health and population at the Harvard School of Public Health, chose Mombasa, Kenya, as the place she’d make an impact. The Aga Khan Hospital was in dire need of better processes and procedures to help the very limited staff use time efficiently and diagnose patients as accurately as possible.

When she arrived in Mombasa to share her passion for public health, teaching, and volunteering, Ladhani was surprised at what she encountered. The challenges the nurses faced each day had slowly eroded their hopefulness and had taken a toll.

The months that she spent in Mombasa gave her a firsthand awareness of the public health challenges in small villages, and her time at Harvard equipped her with the know-how such that she was able to offer the nurses and doctors essential tools and recommendations to improve their procedures.

“There was something about this time — being there put your optimism into perspective,” Ladhani said.

Since her return to the U.S., there isn’t a day that passes when her experience doesn’t come to mind, she said. “Something happens and I stress about it, and my trip to Kenya puts everything into perspective.”

Toward the end of her summer, Ladhani also traveled to Seattle, Mexico, and Vancouver before heading to Boston to finish her degree.

Juan Tellez Sandoval, an HKS second-year master in public policy (M.P.P.) student from Monterey, Mexico, thinks of the planet as his home. He has lived in Panama, Japan, Germany, Denmark, Frankfurt, New York, and Honduras, and has volunteered in Ukraine and Poland where he taught English.

After he finished his last final in May, he met with members of Parliament in London for a Harvard Alumni Association event, then went to Azerbaijan for a Harvard trek, which had been organized by graduate students.

The government of Azerbaijan invited the students to meet with officials and learn about the culture and politics of the region. Sandoval left Azerbaijan to begin his rotational internship at the Turkish Treasury, which included the Central Bank and the Minister of Development. Although he had never lived in Turkey and couldn’t speak the language, people in Ankara spoke English well so his worries quickly subsided.

“International affairs and international security are issues I am very passionate about, and I decided I would spend the two weeks after my internship in Iran, Lebanon, and Syria,” he said. “I wanted to see these places for myself. I also went to Palestine, Israel, and Pakistan with Harvard students. We met with government officials, those in the private sector and nonprofit sector as well.”

His summer visits to the Middle East were his first-ever in the region, Sandoval said, and it changed his entire perspective. “My parents were scared to death all summer while I was gone, but my thoughts about the Muslim world have changed so much.”

“It was very different from what I was expecting,” he said.

“Specifically, in Ankara they were some of the nicest people I have ever met in my life. They are very open and interesting. I left thinking Pakistan is probably one of the most misunderstood places in the world.”

Sudipta “Nila” Devanath, a 2L at HLS, spent her summer in Washington, D.C., where she worked for the Department of Justice as a legal intern in the Antitrust Division.

“I had the chance to work on the investigation of a potential hospital merger [and I] researched and presented findings on the geographic market, joint contracting, clinical efficiencies, financial integration, and high-risk management programs,” she said, viewing the experience as a career builder.

McArthur Pierre, an HBS student, spent his summer between Kampala, Uganda, and Nairobi, Kenya, as an investment associate where he searched out small businesses that needed help with financial modeling and raising capital. “I’ve always known about the opportunities in East Africa, but to be there and personally help small business owners succeed was something I’ll never forget,” he said.