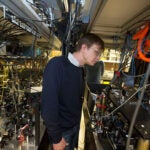 You may have to dig to find it, but there’s good news out there on climate change, and not just a little.

Eighty-one percent of the world’s top 500 companies are considering the operational risks from climate change, and are even talking about it publicly. For instance:

“We don’t have an option; we have to do it,” Figueres said.

Figueres spoke the same day that the U.N. Intergovernmental Panel on Climate Change released the executive summary of its latest report on the issue.

Despite Figueres’ optimism, the report painted a bleak picture, saying it is more certain than ever that human activities are causing climate change, that sea level could rise as much as three feet by the end of the century, and for the first time setting an absolute limit on carbon emissions — 880 gigatons, more than half of which has already been emitted — not to be exceeded if the world is to limit warming to 2 degrees centigrade.

Figueres, who was introduced by Robert Stavins, the Albert Pratt Professor of Business and Government at HKS, first acknowledged that the news on climate remains predominantly bad, citing not just the latest U.N. report, but also the melting of northern polar ice and the atmosphere’s crossing the threshold to 400 parts per million of carbon dioxide.

“I visit today under a scenario that is predominantly a bad news scenario,” Figueres said. “This report just released shows that, yet again, the window to limiting warming of the planet to 2 degrees is closing on us very, very quickly.”

Yet while bad news is dominant, there is good news too, she said, though it gets little attention. She suggested that helpful action on climate change will come only if people build on successful examples and if they refuse to give in to defeatism.

Among the reasons for optimism, Figueres said that technological developments are most exciting. The cost of solar energy has fallen dramatically, and new technologies make it plausible to see a future that uses personal energy, unhooked from the grid. Energy-efficient automobiles are being developed, including self-driving cars that maximize efficiency in traffic and fuel use. Energy efficiency is increasingly emphasized in a new generation of green buildings, pointing toward a future of smart structures that balance energy efficiency and comfort.

Technology, Figueres said, may mean a future where developing nations are able to improve their standards of living at the same time that they reduce emissions. This seemingly contradictory development, she said, would necessitate finally breaking the longstanding link between standards of living and greenhouse gas emissions.

Though some of the more advanced technological ideas may be years or decades away, Figueres said these are not pipe dreams. Massachusetts alone, she said, has 5,500 companies employing 80,000 people already working in clean energy.

“The good news is that the future is just around the corner,” she said. “These technologies are … not fairy tales. They’re being developed and will be on the market faster than we know.”

Figueres spoke directly to students in the room, saying that their efforts, imagination, and leadership will be key.

“There is no room to fail. In the case of climate change, there is no Plan B, because there’s no Planet B,” Figueres said. “You are Plan A.”

She added after her talk that many of the successful examples of energy change are small, with many being pilot projects. As such, they face problems of time and scale, of having to massively scale up quickly enough to curtail carbon emissions before emissions pass a critical threshold.

Figueres’ talk was sponsored by the Harvard Project on Climate Agreements, the Harvard University Center for the Environment, the Belfer Center for Science and International Affairs, and the Mossavar-Rahmani Center for Business and Government.