For big questions, a bigger forum 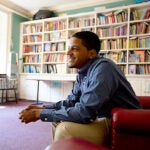 Grant to back expansion of ‘Reflecting on Your Life’ initiative

One of the most challenging and lauded programs at Harvard isn’t part of the academic course curriculum.

Coordinated through the Freshman Dean’s Office, the “Reflecting on Your Life” initiative invites freshmen to think about meaning and purpose. Featuring facilitators from across the University, the program typically meets for three sessions, at the beginning of second semester.

The sessions fulfill no academic requirements, and yet, year after year, freshmen show up for three consecutive weeks to participate in small-group programming that delves deeply into their values, leading to conversations with peers that sometimes reveal gaps between thought and action.

“The program gives students time to stop and think about what really matters to them,” said Katherine Steele, project manager and director for freshman programming, such as “what their values are and how those values shape the decisions that they make — from what’s important to them to how they spend their time, and even who they spend their life with.”

Now, a grant from the Teagle Foundation is broadening the scope of the program, making it possible for Harvard to share it with colleges and universities interested in launching similar initiatives. The grant will also enable collaborations on best practices and programs to help students to consider the big questions: meaning, value, and purpose.

The grant will sponsor the effort for three years, helping leaders at Harvard and elsewhere understand the impact of the various ways universities encourage dialogue about personal values and citizenship. But most importantly, Steele said, the grant should help promote programs that allow students to figure out how they want to live.

“How do you affect moral growth? How does someone really solidify what they stand for? It’s about developing a stronger sense of who they are, and what they stand for. It’s about drawing the lines between what’s important to you and how you’re spending your time … and if the connections between those two things are missing, what can or should you do about it?”

“Reflecting on Your Life” began at Harvard as a result of the in-depth, one-on-one interviews that Light conducted each year with students about to graduate. One answer was especially provocative, that of the student who told Light that Harvard had “forgotten to offer the most important course of all” — namely, how to think about living his life.

“It was a revelation to realize that we were missing out on such a key and fundamental question,” Light said. “It’s often covered in an academic sense, but not necessarily from a personal, real-life point of view. What does it mean to live a happy, or useful, life? What about living a productive life? Are those concepts inherently different? If they are, which one do you choose?”

Light approached Howard Gardner, the John H. and Elisabeth A. Hobbs Professor of Cognition and Education, for his perspective. Gardner, whose research has often focused on professional ethics, said that the discussion mirrored a trend he had observed among students over the years.

“I’d become concerned about something I’d observed from our best and brightest,” Gardner said. “They wanted to do the right thing, but they felt like the most important thing was to be successful. So if they had to cut some corners in order to accomplish that, they felt like they needed to do so. The metaphor I like to use is that the ethical muscle was very thin.”

For the past six years, according to both individual testimony and a formal evaluation, alumni of the program have left it feeling that they have a better understanding of themselves, their goals, and their values.

“In the 19th century, one of the reasons you went to college was to think about values, purpose, and deep spiritual values — which was completely expunged in the 20th century,” Gardner said. Although the secularization of universities was positive in many ways, he said, a void was left.

“Some students fill this with religion, science, or a strong familial unit, but for many students in today’s fast-changing world — particularly those new to college, and especially those attending a high-pressure institution, such as Harvard — they need, and deserve, our guidance and our help.”

For Steele, the grant will provide an opportunity for students across a range of Schools to pause and take the time to ask themselves the hard questions.

“Harvard students are so busy and so focused, but we’ve found that students really benefit from posing these challenging questions,” she said. “When we create an opportunity for them to do that, and have a structure where they can pose these questions, it can have a really profound effect.”