Following the missteps of giants 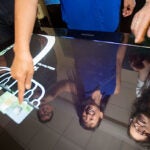 The watchword is innovation

In the early 1950s, famed chemist Linus Pauling announced that he had won the race to figure out the structure of DNA. It is a triple-helix, Pauling said, arranged with the DNA bases sticking out of the molecule.

Soon after, James Watson and Francis Crick begged to differ, proposing a double-stranded molecule with the bases on the inside, linking the strands and forming a twisted-ladder structure.

If one had been gambling on who would be first to determine DNA’s structure, Pauling would have been a pretty safe bet. In 1951, he had correctly determined the structure of proteins, a feat that would win him the 1954 Nobel Prize in chemistry. He would go on to win the 1962 Nobel Peace Prize, for his anti-nuclear work, making him the only person to win two Nobel Prizes without sharing either award. Today, he is widely considered one of the greatest scientists in history.

But in regard to DNA, Pauling wasn’t even close. The triple-stranded structure ignored his own observation from 1948 that DNA was likely made up of two, not three, complementary parts. It also ignored basic rules of chemistry. Putting the bases on the outside meant that the negatively charged phosphates of DNA would be packed together on the inside and, since similar charges repel each other, would result in the molecule breaking apart.

Pauling knew that his model had flaws, but he pushed ahead anyway, certain that the details would work themselves out with further exploration. Instead, his proposed triple-helix structure for DNA was front and center among the “brilliant blunders” dissected by several prominent scientists Wednesday at the Barker Center.

Sponsored by the Mahindra Humanities Center, the event featured Mario Livio, a senior astrophysicist for the Hubble Space Telescope Science Institute and author of several popular science books. His latest is “Brilliant Blunders: From Darwin to Einstein, Colossal Mistakes by Great Scientists That Changed Our Understanding of Life and the Universe.” Among the blunderers are Fred Hoyle and Lord Kelvin.

Livio chose Pauling’s as an example of the mistakes he highlights in the book, before taking questions from a panel of faculty members, including Frank B. Baird Jr. Professor of Science Lisa Randall, Clowes Professor of Science Robert Kirshner, Aramont Professor of the History of Science Janet Browne, and Anna Henchman, an assistant professor of English at Boston University who has written about 19th-century astronomy and its impact on Victorian-era literature. The event was moderated by Homi Bhabha, director of the Mahindra Center and the Anne F. Rothenberg Professor of the Humanities, and introduced by Walter M. Cabot Professor of Aesthetics and the General Theory of Value Elaine Scarry.

The errors, Livio said, show that even some of history’s most brilliant figures were still human. Even so, Livio made a distinction between “brilliant blunders” — which extend from a pattern of outside-the-box thinking and sometimes lead to further discoveries even when they’re wrong — and sloppy or careless errors.

He meant the book to showcase what he sees as a central truth about science, one that is often lost in the celebration of discovery: that every scientist will go up blind alleys and be forced to start over, because scientific progress itself builds on both successes and failures.

“Science is presented as a pure success story, as if it is a direct march to the truth,” Livio said. “Nothing can be further from the truth.”

Pauling’s highly competitive nature worked against him, Livio said, because he knew that other talented scientists were working on DNA’s structure. He spent 13 years working out and confirming the structure of protein but only a month on DNA, putting too much trust in his intuition. He also held to the philosophy that even an incomplete or imperfect idea creates value by sparking discussion and advancing work by others.

In that case, Randall said, Pauling was not necessarily wrong, as it is common for researchers to publish findings that are then confirmed and built upon or proved erroneous. That is one way that the scientific community functions, she said.

Livio’s “blunders” may be considered “brilliant” because they’re confined to theory, Kirshner said. In experimentation, by contrast, mistakes are frowned upon and not often described in the same manner. Randall added, however, that experiments include “uncertainty” measurements, and something otherwise considered a mistake may, if uncertainty is calculated correctly, be within the parameters for a correct answer.

The conversation turned to the nature of beauty in the universe. Different panelists had different ideas, but Livio pointed to a single image from the Hubble Space Telescope, which itself endured a mistake-filled childhood — the defective mirror it was launched with had to be repaired by spacewalking astronauts from the space shuttle. The image, which filled the screen in the Barker Center’s Thompson Room, was an ultra-deep field view from Hubble, showing thousands of points of light, each a galaxy containing billions of planets, and showing, Livio said, just how vast the universe is.