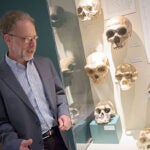 Narrative of the body, with a nasty twist

Hitting the perfect tennis serve requires hours and hours of practice, but for scientists who study complex motor behaviors, there always has been a large unanswered question — what is the brain learning from those hours spent on the court? Is it simply the timing required to hit the perfect serve, or is it the precise path along which to move the hand?

The answer, Harvard researchers say, is both — but in separate circuits.

Bence Ölveczky, the John L. Loeb Associate Professor of the Natural Sciences, has found that the brain uses two largely independent neural circuits to learn the temporal and spatial aspects of a motor skill. The study is described in a Sept. 26 paper in Neuron.

“What we’re studying is the structure of motor-skill learning,” Ölveczky said. “What we were able to show is that the brain divides something that’s complex into modules — in this case for timing and for motor implementation — as a way to take advantage of the hierarchical structure of the motor system, and it imprints learning at the different levels independently.”

To tease out how those independent circuits operate, Ölveczky and his colleagues turned to a creature well-known for its ability to learn — the zebra finch. The tiny birds are regularly used in studies of learning because each male learns to sing a unique song from its father.

In a series of experiments, Ölveczky’s team used traditional conditioning techniques to change the timing of a bird’s song by speeding up or slowing down certain “syllables” in the song. They could also change which vocal muscles were activated and have the bird sing at a higher or lower pitch.

Additional evidence that the circuits for learning motor implementation and timing are distinct came when researchers lesioned the basal ganglia of the birds — the region of the brain long thought to play a critical role in song learning.

“The thinking had been that there was one circuit for song-learning in general,” Ölveczky said. “We found that if we lesioned the basal ganglia and repeated the pitch-shift experiment, the bird could no longer use the information it got from our feedback to change its behavior — in other words, it couldn’t learn.”

Experiments aimed at changing the birds’ timing, however, were just as effective, suggesting two separate learning circuits — with only one involving the basal ganglia.

Such independence and modularity is critical, Ölveczky said, because it allows different features of a behavior to be modified independently if circumstances change. Parallel learning of different features can also speed up the learning process and enable the flexibility we see in birdsong and many human motor skills.

“If you learn something — it could be your tennis serve, or it could be any behavior — and you need to slow it down or speed it up to fit some new contingency, you don’t have to completely re-learn the whole thing, you can just change the timing, and everything else will remain exactly the same.

“In fact, ‘slow practice,’ a technique used by many piano and dance teachers, makes good use of this modularity,” Ölveczky said. “Students are first taught to perform the movements of a piece slowly. Once they have learned it, all they need to do is get the timing right. The technique works because the two processes — motor implementation and timing — do not interfere with each other.”

The hope among researchers, Ölveczky said, is that a better understanding of how birds learn complex motor tasks such as singing unique songs will help shed new light on the neural underpinnings of learning in humans.

“For us, this is inspiration to look at similar types of questions in mammals,” he said. “The flexibility with which we can alter the spatial and temporal structure of our motor output is similar to songbirds, but our understanding of how the mammalian brain implements the underlying learning process is not anywhere near as advanced as for songbirds. The intriguing parallels in both circuitry and behavior, however, suggest a general principle of how the brain parses the motor skill learning process.”