A professorship and a MacArthur 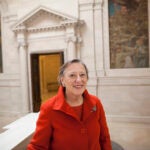 Vijay Iyer has won wide acclaim in the music world as a jazz pianist and a composer, has an academic resume that includes degrees from Yale University and the University of California at Berkeley, and has published in a number of scholarly journals. And now Iyer, who in January will become the first Franklin D. and Florence Rosenblatt Professor of the Arts in Harvard’s Department of Music, is in even more select company. The John D. and Catherine T. MacArthur Foundation today awarded him a prestigious “genius” grant.

The foundation, which awards its no-strings-attached grants of $625,000 annually, recognized Iyer as an “ardent investigator of musical communities, practices, histories, and theories. He mines core rhythmic, melodic, and structural elements from a wide range of sources to construct richly varied, improvisation-driven solo and ensemble music.”

It is that combination of interests — and his work as both as a music-maker and a researcher — that Iyer hopes to bring to his teaching and research at Harvard.

“I’m very excited because in a lot of ways this is a new step,” Iyer said of his upcoming appointment. “It’s not that I’m a stranger to academia. But I’ve spent the last 15 years mostly outside of it, working as a composer and performer, as well as collaborating with a lot of artists across many different communities and disciplines.

“I have been able to keep a toe in academia by contributing journal articles and giving lectures here and there, in dialogue with my creative work,” he added. “When I arrive at Harvard, I look forward to wading in deeper — mentoring student composer-performers, illuminating new currents in American music, and convening conversations with some of the stellar thinkers on campus. And I especially look forward to connecting all of what we do to the world beyond the University, because a life in the arts means a life of service to those around us.”

As a musician, Iyer has been nominated for a Grammy, and has won two ECHO awards (the so-called “German Grammys”), a Doris Duke Performing Artist Award, and an unprecedented “quintuple crown” in DownBeat Magazine’s International Critics’ Poll.

He has a degree in mathematics and physics from Yale, and an interdisciplinary doctorate in music cognition from Berkeley. His work has been published in journals ranging from 2010’s “Best Writing on Mathematics” to the Journal of Consciousness Studies. He has served on the faculty at the Manhattan School of Music, New York University, and the New School. Iyer is also director of the Banff Centre’s International Workshop in Jazz and Creative Music, an annual three-week program in Alberta, Canada.

Though he won’t arrive on campus for several months, his appointment is already generating excitement among his future colleagues.

“I am absolutely delighted that Vijay Iyer is joining the Department of Music at Harvard,” said Alexander Rehding, the Fanny Peabody Professor of Music and chair of the Department of Music. “This is the first appointment of its kind in the history of the department. Vijay is a performer and composer, a creative musician, of the highest order. To call him a jazz musician would almost be too limiting. He is a musician, scientist, thinker, and a teacher whose work crosses intellectual and artistic boundaries in ever-new ways.”

In particular, Rehding said, he looks forward to seeing how Iyer’s concept of “embodied cognition,” a central theme in his work as both a musician and a scholar, can add new dimensions to the Department of Music’s focus on improvisation, performance, and composition.

“Vijay is, in many ways, the embodiment of Harvard’s Arts Initiative, combining creative work with other forms of research and scholarship,” Rehding said. “I see great opportunities for collaboration with American studies, African-American studies, South Asian studies, psychology, mind-brain behavior, as well as any number of other sciences studying cognition. He will be a great addition to the Harvard community.”

“It is a great pleasure to welcome Vijay Iyer to Harvard,” said Dean Michael D. Smith of the Faculty of Arts and Sciences. “This appointment will give students a truly special opportunity to learn from a world-renowned musician who has excelled in all facets of his art, and it will also open new doors to interdisciplinary investigations that explore connections between the humanities and the sciences. I look forward to Vijay’s contributions to the Harvard community and the world of scholarship at large.”

While his appointment is in the Department of Music, Iyer is looking forward to working with scholars across a host of disciplines, from musicology to the sciences, to explore the questions that interest him.

“I’m interested in asking: What is listening?  How do we make sense of what we’re hearing, and how is knowledge formed around and through that process?” Iyer said. “These questions have animated my work all along, both as an artist and in the discourse around it. This position will give me a chance to focus and sharpen those questions, and elevate them to a space where they can generate some new ideas, drive original research, and inspire new creative work.”

In addition exploring cognition and music, Iyer hopes to address the very objects of study in music academia.

“Historically, musicology has focused on scores, and, more recently, on recordings,” he said. “But music is initially a process — not solitary, but participatory — before it circulates as objects. I’m trying to identify that dichotomy a bit more clearly and tease out what’s different in those two cases — music with bodies, by which I mean music in the context of others, and music without bodies, which we experience through recordings, scores, or other virtual means. I would venture to say that those are two separate, though intersecting, categories of experience.”

His work in the classroom won’t put a stop to Iyer’s output as a musician.

“The goal for me is to integrate all of these spheres, so I can come to Harvard as myself,” he said. “To me, it’s all connected.  I’m a living, working artist who is interested in asking broad, interdisciplinary questions — about what music is, how we make it, and how we listen — in order to reimagine what music can do in the world, and then to put those ideas into practice.”